Newsletter
Sign Up today for our FREE Newsletter and get the latest articles and news delivered right to your inbox.
Home » 1965 Chevy Impala With Incredible Custom Paint Becomes Shop Owners Entry Into The Lowrider lifestyle 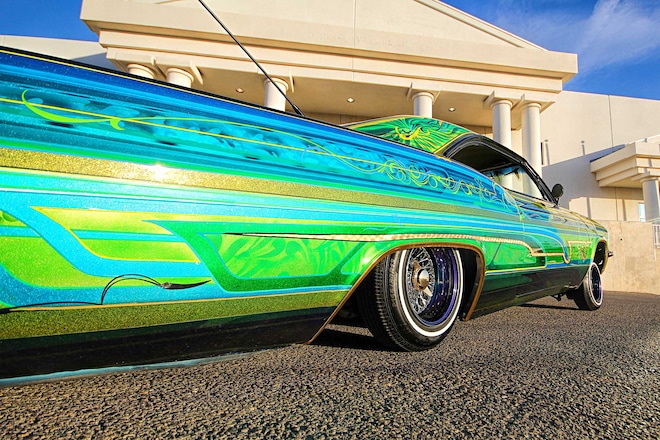 Here’s a 1965 Chevy Impala with an interesting story. It’s a lowrider built by Victor Rivera at his body shop called Big V Designs. As a kid, Victor was always interested in lowriders, but he was so busy with life that nothing happened. That is, until 2009 – after retiring from the Army, Victor opened up his body shop and not long after, his lead painter, Marco decided to sell his ’65 Impala. Victor jumped at the chance. The Impala became his entry ticket into lowriding while the car doubled as a showpiece to display his shop’s capabilities.

The car looked clean but ask any body guy and they’ll tell you that pretty paint can easily hide bad work. After tearing into the car, they found a history that reads like a bad rap sheet. Lots of imperfections, plenty of bondo and layer upon layer of old paint jobs. Once the car was completely stripped, Victor replaced any rotted panels and added some custom touches like shaved door handles and molded bumpers along with a two-tone paint job—but none of that lasted too long.

Victor and the crew at Big V decided there was so much more they could do so they decided to go all out and step outside the box. After stripping the car, they started with a Kandy Lime and Gold base, followed by plenty of patterns using candies, chameleons, green pearls, teals, blues and even yellow. But even at that, it still wasn’t enough.

With the car fully polished and reassembled, they wet sanded the clear to make way for gold leafing and pinstripes by Mr. Ortiz. Before applying additional clear, Victor had Chepe Apodaca add a mural to the trunk.

Mando at Hi/Lo Hydraulics then installed a complete air ride set up, while Johnny at Sound Lab installed a custom sound system that includes four 10-inch Sundown Subs being held securely in a custom plexiglass box. Javier then stitched up a multi-color interior to match the exterior and even added some engraved gold pieces for good measure.

Since its completion, the car may have hit a few shows, but Victor has a more intense passion for bringing it to the streets of el Paso. It’s a car built to drive, and many in the surrounding area know it’s being used often as he can be seen cruising it with his family and even driving it to the paint store.