Newsletter
Sign Up today for our FREE Newsletter and get the latest articles and news delivered right to your inbox.
Home » 1965 Chevy Impala Super Sport – The Red One 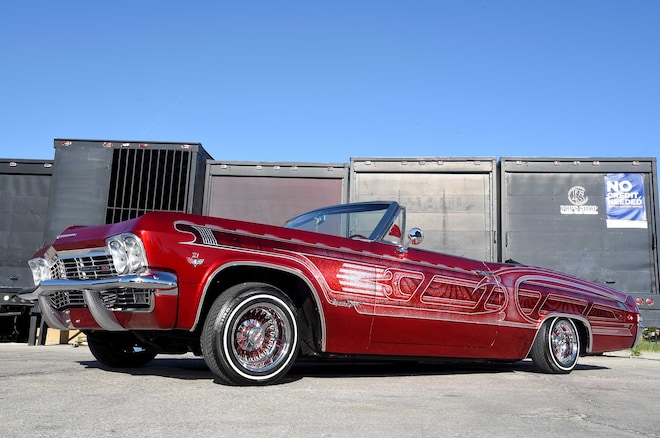 Sometimes, lowriding is in your blood and you are born into the lifestyle. Jerome Marquez grew up in Henderson, Nevada where he helped his father John Barlion build his cars and helping others as well. In Jerome’s family, cars brings them together and give them a sense of pride. Jerome has built multiple cars in his life. The one you see today is nicknamed the “Red One” because he is also the owner of a blue 1965 Impala hard top that has been featured in a past issue of Lowrider Magazine. When people ask about which ride he is taking, they ask the Blue One or the Red One and that is how this one got its name.

The “Red One” took approximately two years to build and was in rough shape when he received the car from some family friends for the best price, free! The car didn’t have floors and needed a lot of work. The car original build plan was to be a daily driver but he couldn’t help himself and needed to lift it. Once it was cut he had a custom paint laid on it. The unique feature that Jerome likes about his car is the unique paintjob. “When your car is painted Kandy Apple Red with silver patterns and flakes, it tends to stand out from the crowd,” says Jerome.

He loves spending time with both of his boys at events and loves that they share his passion and love cars as well. Just like the torch being passed on from his father, we are sure that Jerome will pass to his boys as well. Although Jerome says that the “Red One” is the last one that he builds, we shall see what the future holds.

Vehicle Nickname
The Red One