Newsletter
Sign Up today for our FREE Newsletter and get the latest articles and news delivered right to your inbox.
Home » 1965 Chevrolet Impala – On a Grander Scale 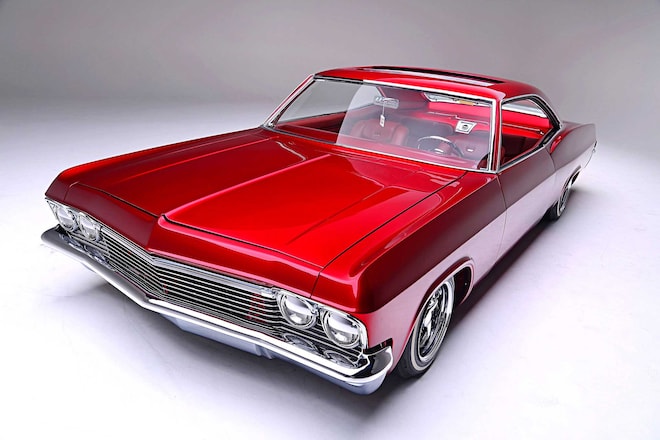 Like most young men, Armando Flores was obsessed with cars, but it wasn’t until he turned 14 years old that he zeroed in on lowriding—and it all began after he purchased his first issue of Lowrider magazine. “I used to buy them to look at cars from Lifestyle, New Movement, Thee United, and few other clubs from back in the day,” Armando explains.

By the time he was 17, he was able to afford a 1965 Impala that he used as a daily driver. This offered him the opportunity to not only explore car culture firsthand, but it gave him a ship to navigate to the San Fernando Valley cruise nights. “All week, all I could think about was cruising. Simply put, cruise nights were the highlight of my week.” But the cruise nights offer more than just a social experience, to be able to hang out and witness all the custom cars cruising sparked his interest even more and that’s when he began drawing lowriders and using every spare moment to further perfect his craft.

Aside from drawing, Armando began building scale model cars and his main purpose was to replicate famous lowriders, such as the Las Vegas car and Loco 64. His model car builds were so accurate and so detail-oriented that it gained him global acclaim for his precision accuracy to exquisite detail. In 1997, he was awarded with the Car Model of the Year award for his craftsmanship in customizing small-scale cars. This would be the first of many awards that Mando would receive, and with the explosion of the model car scene, Armando went on to found the Masterpieces Association—an organization that unites the very best professional car model builders from around the world.

After countless small-scale builds, Mando felt it was time to try his hands on building a life-size version of those very same cars and went on the hunt for a project car. He wanted another 1965 Impala but this time around it had to be a Super Sport. His search came to an end when he found the shell of this one sitting in someone’s backyard. “It was just the skeleton of a car,” Mando says, “but I knew I could bring it back to life.” He was able to render and conceptualize the car in its completed form and knew that if he could visualize it, then he would be able to build it. “I felt that my tedious and countless hours working on small-scale cars prepared me for this build and it would be one that would challenge me like no other.”

In 2006 he became a member of Lifestyle Car Club, a club that he had admired since he was a kid. As a new member, he wanted to prove that he would be able to build something worthy of flying that plaque, and that’s exactly what he did.

During the build, he made sure to personally remove every nut, bolt, and screw from the vehicle. He also learned to weld and performed most of the bodywork with the help of Juanito from Indio, California. Once the body was prepped and ready for paint, the car was taken to Kandy Connections were Bill Carter laid a custom Ruby Red candy mix on the body. Next, he decided to design the interior by first lowering the whole interior down 2 inches. He then took it to California Upholstery so they could wrap the seats in red leather and velour. Joe Ray then dropped in a Blue Print 350 Lowrider Series engine, and once tested and tuned the car was hauled to Las Vegas for the SEMA Show.

In total, the build took Mando 11 years to complete and as he looks back at the process he can’t help but feel proud of everything he’s accomplished and amazed by everything that he’s learned. Yet while he’s extremely proud of his build, it can never compare to how proud he is about being a supportive husband and an excellent father; we tip our hats to a job well done on both platforms.