Newsletter
Sign Up today for our FREE Newsletter and get the latest articles and news delivered right to your inbox.
Home » Muay Thai Champion and Klique C.C. President’s Custom 1965 Chevrolet Impala Convertible 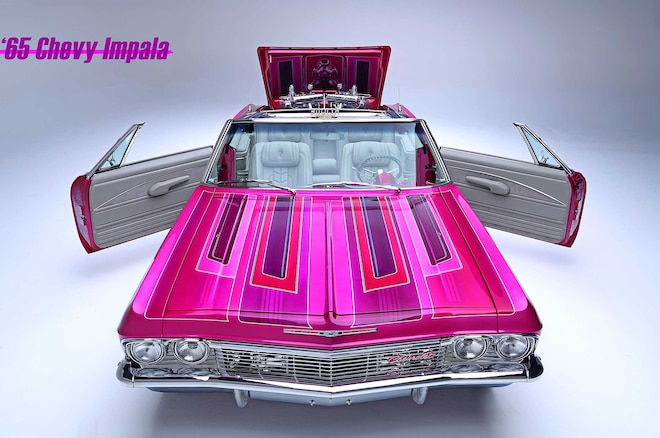 This 1965 Chevrolet Impala kicks ass and so does its owner…literally. It’s owned by Chino Areyzaga, an AZ resident with over three decades of Muay Thai kickboxing experience and the fruits of his labor have landed him four championship titles. But when he’s not fine-tuning his martial art, you can probably find him polishing his ragtop Impala which he enjoys with equal passion.

As the current President of the Phoenix chapter of Klique Car Club—a club he founded back in 1995—he takes great pride in being an integral part of lowriding, and finds passion in showing his ride, which he started back in the early 2000’s. When he found the car, it was a rust bucket sitting in a backyard. “It sat for a few years as I was working on building my house at the time” says Chino. Once he was ready, he got a lot of assistance from his father in law, Fred. “My father in law is the smartest man I know, and he suggested that I suicide the doors and trunk” says Fred.

In the process, they decided to automate both door and trunk which are both controlled using actuators via remote control. In addition, the hydraulic system sits on a scissor lift that extends up and out of the trunk, and interestingly enough, the hydraulic setup is activated without a battery, instead, ran off of a capacitor charging system that uses juice from the alternator. “Fred came up with that system and it charges in a minute,” says Chino.

It took the duo a decade to finish this masterpiece and according to Chino, “This car is a representation of myself and my passion for martial arts, so I named it ‘El Chinito.'” Of course, this project could have not been done without the help of friends and family so he would like to thank his wife for her continued support, his father in law Fred, Bugs, Fish, Elvis and his fellow Klique members.