Newsletter
Sign Up today for our FREE Newsletter and get the latest articles and news delivered right to your inbox.
Home » 1964 Chevy Impala Super Sport – A Shrine On Wheels 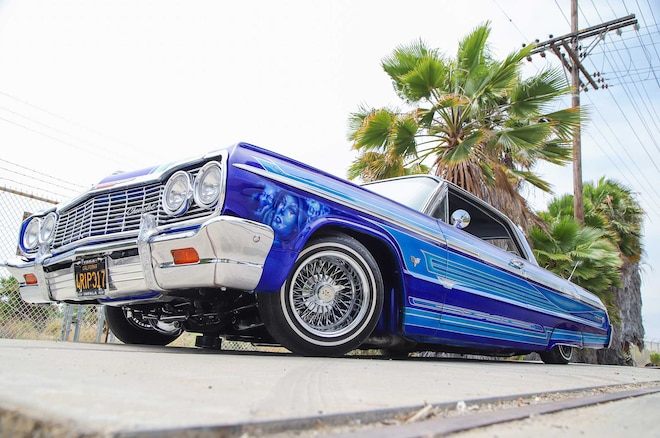 Sometimes in life we must experience the lowest of lows to truly appreciate our own existence and the impact we have in the world. In the midst of tragedy, creativity, perseverance and love emerged from the depths of despair after the sudden passing of Javier Mora’s son, Javier Jr., affectionately known as Chubs. Javier desperately wanted to honor his beloved son the way he knew best, by building a classic ride from the ground up in his memory.

A few years ago, the San Diego native came across his dream car while passing through a job site. The 1964 Chevy Impala was in bad shape, but that didn’t stop Javier from taking on the project. After all, he would do anything for his son. He started from the inside out, by building a custom chromed out 350 small block engine and installing a new transmission. The car was then hauled to Oxnard to be fitted with hydraulics installed by Lugos Shop.

After the build was finished, Javier admitted that the Impala did not meet his expectations. It took an additional three years to make the changes that aligned with his original vision. Most of these changes focused on the beautification of the ride. Javier wanted people to notice the Impala approaching from a distance. So he took the ride to Johnny B., a well-known and respected independent painter in Southern California. He chose a Kandy colored blue, which was Chubs favorite color. The finishing touch was lavish patterns throughout the car and a one-of-a-kind mural dedicated to Chubs. Lastly, Javier would install blue LED lights under the Impala to make the car light up the night.

The ride was finally ready to roll to its first competition, but first, Javier needed to visit the DMV to get it registered. He received generic paper plates from a stack that sat behind the counter. At first, he didn’t pay much attention to the mix of letters and numbers on the plates until his sister brought it to his attention. She asked him if he had picked personalized plates because they read, “4RIP317,” the day Chubs passed away. Javier was stunned! He couldn’t believe it. What he did believe was that it was a divine sign from his son in the heavens. In a way, it was Chubs seal of approval after the build was finished.

Since completing the Impala, Javier has taken home more than 30 awards from competitions across the west coast. As the president and founder of the ‘Touch of Diego’ car club, Javier enjoys cruising his custom ride in the summertime. Now, every time he jumps behind the wheel of the Impala, he feels as if his son never truly left his side.

Suspension
Four ProHopper pump set up with 5 switches and 10 batteries.