Newsletter
Sign Up today for our FREE Newsletter and get the latest articles and news delivered right to your inbox.
Home » 1964 Chevy Impala SS – Blue Dream 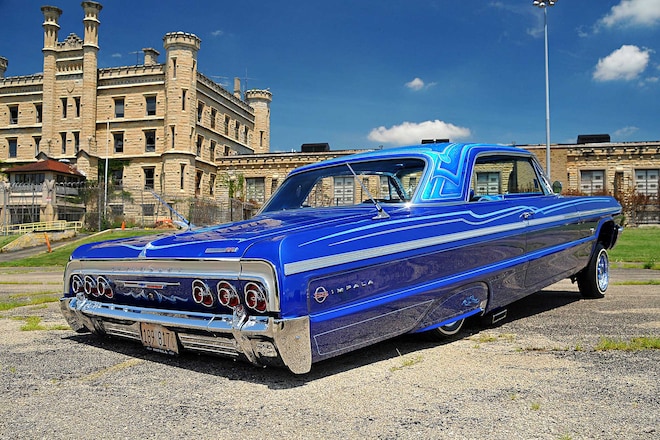 It’s pretty hard to make a statement in the lowrider community when you have a 1964 Impala, and even harder when you live in Chicago. Throughout the years Chicago has elevated its game with quality rides and the competition is stiff. Javier Zamora Jr. always knew he’d own one, but little did he know that he’d become a key player.

After college, Javier was able to purchase a 1995 Honda that he “Euro’d” out. It was a five-year project that gave him plenty of experience, but as with many Hondas its lifespan was cut short when it was stolen, never to be seen again. Looking for something new, his cousin turned him onto a 1964 Chevy Impala. It already had a showstopping paintjob done by Michael “Sic” Cato and at the time it was being used as a hopper, so a deal was made and his build out began.

Once he took possession, Javier noticed that it was leaking power steering fluid from multiple places because of the wear and tear from hopping the classic. Javier knew he was in for a long road but was willing to take on the task of bringing it back to a street rider. To begin the Impala was brought to Mando’s Custom Shop in Berwyn, Illinois, where the motor work was repaired and all the paint flaws were corrected. Chrome and engraving was added underneath to make the Chevy stand out with its makeover. The rearend was switched over and engraved to make an impact when lifted.

For the trunk, Javier updated the setup for more practical street performance and enlisted Ernesto from Echizos Customs who cleaned up the trunk and added the stereo system to the Impala. The next step was adding an interior that matched the flawless exterior by having Martin Mina of M&M Interiors who reworked the entire cabin to SS specifications. Hector Terrazas from OG Moonroofs refurbished the sunroof and added chrome railings. Krazy Kutting from Yuma was used to engrave a total of 65 pieces of chrome on the Chevy.

When it came time to add some wheels, Javier contacted Speedy’s Metal Finishing in California where he got a set of 72-spoke Zenith Wire Wheels that he had painted and engraved. Mando’s Customs added chrome disc brakes and spindles along with new stainless steel brake lines. Javier’s support team, including his friends and family as well as many reputable companies, made it possible for “Blue Dream 64” to become a huge success, which has now set a very high bar in the city of Chicago.