Newsletter
Sign Up today for our FREE Newsletter and get the latest articles and news delivered right to your inbox.
Home » 1964 Chevy Impala Convertible – Trust The Process 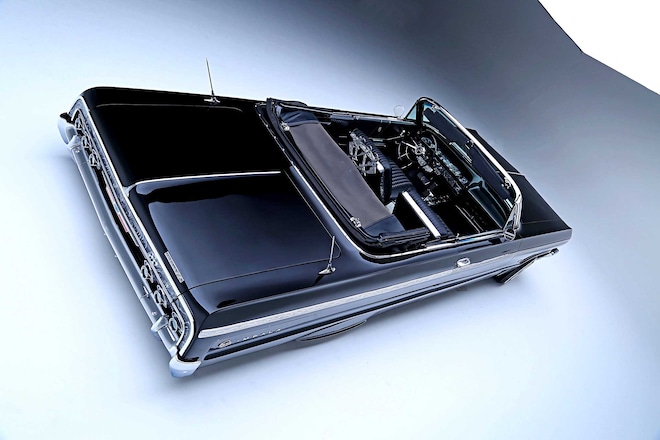 Like most of us, Mario got his informal introduction to the world of lowriding by way of Lowrider magazine and music videos. In his youth, he’d flip through pages of the magazine and dream about how he’d build one, but as he got older this mind-set changed. “I loved [lowriders] since a young age but I never thought it was possible to achieve back then, and it seemed all that much harder once I had a family,” Mario explains.

Looking back he remembers those thoughts running through his head, but it came with good reason. He was married to his high school sweetheart and with two daughters his family was his first priority. But his mind-set soon changed when he ran into a family friend who had just purchased a 1962 Impala with money he had saved up. “My friend, Jonathan, was young, but he saved up all his money to purchase the 1962. After realizing that it made my dream seem attainable,” Mario says.

With a newfound thought process, Mario began an online search, and after months of due diligence, he located a 1964 Impala Super Sport that was for sale. With absolutely no hesitation he made arrangements with the seller, hooked up a trailer, and took an eight-hour drive up north to Salinas, California. After a quick visual inspection, the car was complete but in need of a complete makeover, so the owner agreed to part with the car for $5,500. With the deal done, they loaded it up and took the trek back home where his wife surprised them with a celebratory welcome that included beers and Pozole.

The very next day they dropped the engine and transmission and got to work. Willie D. took care of the mechanical overhaul, parts were sent out for engraving and chrome, and ultimately his story picks up where so many left off. After four months of sitting at a body shop, nothing on the car had been touched and he was forced to pick up his car. Luckily for him, he was able to link up with Vmax. Frustrated, but not deterred, Mario dropped off the rag to Vmax’s shop where they took care of the bodywork and paint, and in the process, they even got the motor and trans dialed in, along with a new interior and a paintjob that shimmers as if it had been dipped in oil.

When the first overhaul was completed the car was taken to its first show in Anaheim, California, where it placed Best in Class 60’s, and from there he became super hyped saying, “My goal was to take it to the baddest show in the circuit: The Las Vegas Super Show.”

Knowing that it would be close to impossible to place, he decided to have more work done, and after some careful planning he had Mike Lamberson add ‘striping, while Sal Elias airbrushed an image of his wife, their two daughters, and imagery of his wife’s 1957 Bel Air and his 1958—both which are currently in the works. Mauricio Sandoval then revamped the interior in a two-tone motif while Crown Polishing did additional chroming, and Jaime Castaneda was called back in to engrave additional pieces.

With the car’s resurrection complete, it was time to baptize the car. Since this would be the first “plaqued” car for their club, Mario decided it was best to hit the car show circuit. In the midst of planning, he also decided to anoint his car “Wino’s ’64.” His next stop was the Fresno Show where they took Second for Best of Show Traditional before heading to Las Vegas where he landed a Third Place position.