Newsletter
Sign Up today for our FREE Newsletter and get the latest articles and news delivered right to your inbox.
Home » 1964 Chevy Impala – Boulevard Legend 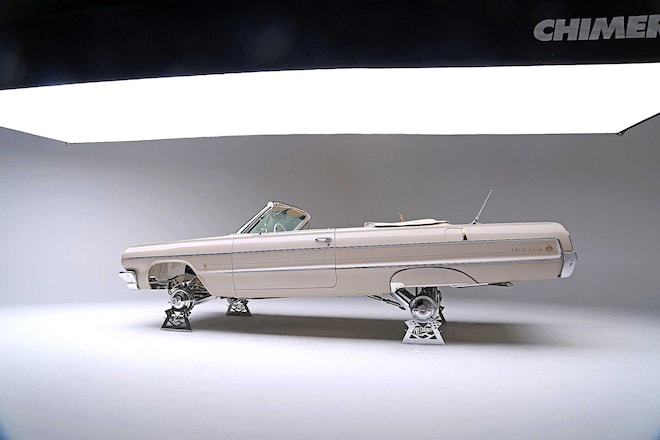 When it comes to automotive customization there is no denying that Southern California is the melting pot of ingenuity, creation, and the birthplace of many styles of car customizing. Regardless of whether you love lowriders, hot rods, imports, or movie cars, SoCal has been the birthplace of many, and in turn produced some of the most legendary cars, and equally legendary companies, that spawned a wave of aftermarket car accessories and the beginning of a movement.

But even with East Los Angeles being the birthplace of lowriding, the reach of its influence is global. From Germany to Dubai, Barcelona to Japan, lowriding has grown exponentially and as it expands, we’re seeing different styles being adopted in other regions. But the infatuation with lowriding is one that goes beyond the consumer. There is even one city so infatuated with the lowriding phenomenon that it led them to become the self-proclaimed and self-anointed “Lowrider Capital of the World.”

While there is no official evidence to prove—or refute—the claim, the fact that a city would promote or be willing to attach themselves to lowriding is quite the honor for the culture. Legend has it that at one point a good majority of grocery getters and daily drivers in Española had a set of wire wheels on it, but I’m too young to know and hadn’t been there prior to this shoot. So after spending a few days there I can attest to their love and infatuation for lowriding, and thus is the case of our next feature, Fred Rael—the president of Prestigious, a car club that has been on the front lines of New Mexico’s lowrider movement for quite some time.

Back in 1993, MTV News came to Española to do a report on the lowrider culture. At the time, he had a 1964 that was red and in really rough shape; but it only took him 18 months to get it looking show worthy. Fred did a majority of the work himself, and at the time of completion, the car rolled out doused in beige paint with a matching top and interior. Whereas most completed cars are looking to debut at a show, Fred took his straight to the streets, and for him cruising took priority over car shows. Years later, the 1964 got a face-lift and after that he focused on a 1967 Impala that ultimately landed him a cover feature in our May ’12 issue. But the real issue here was that building the 1967 in turn motivated him to do the same to his 1964, and that’s exactly what he set out to do. At first Fred was looking to do a full color change, but after throwing the idea around, his plans changed. “Everyone began telling me their memories of my car, some of them were just kids when they first saw it. This car inspired a whole generation of lowriders and it would be disappointing to change the car to a point it would no longer be recognized as the ‘Blvd Legend’ that it has become.” With that feedback, he decided to rebuild the entire car but still keep the distinct look it had retained. Other than the chrome, Fred had the entire car revamped in his hometown of Española, and he even used everyone who had previous worked on it some 20 years ago—how’s that for loyalty?

The rebuild began with Fred and his son, Anthony, doing the fabrication, body, paint, and hydraulics at their Blvd Customs’ shop. Julien returned to do the interior, Carmelito and Ricky redid the exhaust nearly 20 years later, and Reese retouched the gold plating. Krazy Kutting boxed, molded, and chromed the undercarriage while the Chrome Shop plated the moldings, grille, and bumpers. For the setup, PJ Montoya crafted the hard lines, Ricard Gomes the telescoping driveshaft, Low Life Hydraulics the Y-bar and shocks, all to complete the lockup look. Blast Factory added the ‘striping and Mario Moya created the mural that brought Northern New Mexico to life. Fred would also like to thank Eli Martinez and his Prestigious club members for all their help and support.

The car was completed in 2015, and the rerelease of this Blvd Legend was greeted with enthusiasm. But knowing that Fred decided to retain its original color and bring back the crew who originally built it is testament to his loyalty to the game and yet another great example of just how strong the backbone of lowriding is. While other lifestyles build cars for awards, we build them for the memories and do so because it’s a family tradition that brings us together in a universal form of expression that will leave everlasting impressions.