Newsletter
Sign Up today for our FREE Newsletter and get the latest articles and news delivered right to your inbox.
Home » 1964 Chevrolet Impala – Sunny Delight 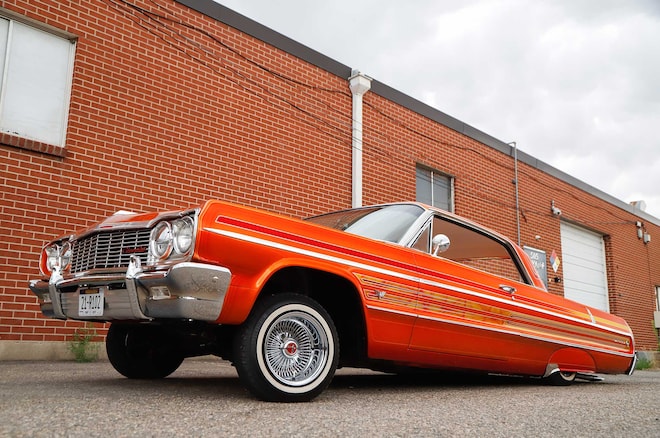 After attending a car show in Denver, Colorado, with his brother, it didn’t take long for Victor Fuentes to begin building his own lowriders. This was back in the early ’80s, and he used what was available to him which included his parents ’67 Impala; the very car he used to learn how to drive as a young boy.

Victor fitted the car with a set of 72-spoke wire wheels and 5/20s. It was his first attempt in joining the traditional lowrider culture, and although he was on the right track, this project wasn’t his best. So, he tried again and this time, he got it right. Victor purchased an ’83 Buick Regal. It was painted a shimmering Cinnamon Kandy, fitted with a black phantom top and a sick set of hydraulics that gave him the front, rear and side-to-side action. After being around the scene for a little longer, Victor finally got the true taste of a lowrider and never turned back.

His fixation for the car scene only grew from there. In 1990, he launched Unique Car Club with a friend, but unfortunately, the lowrider culture was missing from Scottsbluff, Nebraska. From there, he moved on to join Compas Car Club in Denver; the very city where Victor’s love for lowriders began. He began attending car shows in different states to see how varying states put their twist on lowriders. After attending show after show, Victor’s heart was taken by the ’64 Impala. Soon after, Victor purchased a ’64 Impala from a friend in San Diego. He entrusted the classic car to well-known painter Sal Manzano from San Diego, California, who traveled to Nebraska to work on his ride.

The Impala was painted a beautiful burnt orange with yellow and red pinstripes-a color scheme similar to a late afternoon sunset. Victor named the car “Sweet P” after the nickname he affectionately gave to his wife, Victoria. The color was also chosen by his wife, which made the build that much more special to his family.

From the date of purchase to finish date, the car was done in a year. The car was designed and built to cruise the streets daily, not as a garage-kept show car. “Sweet P” has gone on to claim a couple of Third Place awards including Lowrider magazine in 2018, but these days, Victor is simply enjoying showing off the car and riding towards the sunset with his wife by his side.