Newsletter
Sign Up today for our FREE Newsletter and get the latest articles and news delivered right to your inbox.
Home » 1964 Chevrolet Impala SS – Perfect Timing 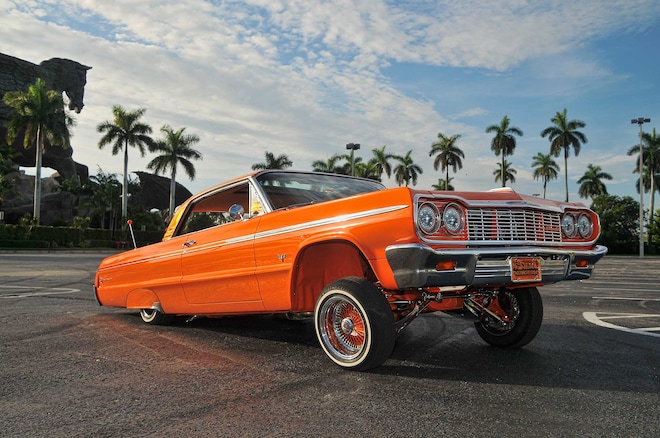 A legacy is the story of someone’s life, the things they did, places they went, goals they accomplished, their failures, and more. Legacy is something that a person leaves behind by which to be remembered. Legacies are pathways that guide people in decisions with what to do or what not to do and wanting to leave a mark and create an example for people to follow. For David “Martian” Holtzman, his legacy is and always will be his perseverance and dedication to the lowrider community. As the President of 25th Street Riders in South Florida, Martian is held to the very highest of standards.

Already gracing the fine pages of LRM with his Cadillac Fleetwood years ago, Martian took another swing at greatness. “I originally purchased my ’64 Impala in 2002,” Martian tells LRM, “around the time I was building my big body I decided to part ways with the Impala.” Eight years later, he got a call from Large at Bowtie Connection South informing him that he had the Impala and was about to list it for sale but was offering it back to Martian first. The Chevy was rough as it had been sitting for the past eight years and definitely needed some TLC. The first thing Martian did was have Freddy at Bowtie South install a 44-inch moonroof. Martian decided that everything would be strictly hands-on by himself and his close friends.

Martian stripped everything off the Impala, and his good friend and painter Keoni Teixeira shaved the firewall and massaged the body. Keoni worked his magic on the roof and patterns throughout the dashboard. A custom PPG Orange mixture was sprayed all throughout the large Impala body. Martian began designing the interior and setup in the trunk. Martian eliminated the fuel hump and molded and smoothed everything in the trunk. Martian singlehandedly fabricated the one-off interior all while updating the car by adding power windows, vintage air, Dakota Digital gauges and many more things. Martian enlisted Bahama Interiors to wrap the seats in high grade leather.

The next step was adding some giddy-up under the hood by adding a new 283 V8 rebuilt and installed by Martian. Chrome accessories surround the new motor and every step was taken to hide excess wires in the engine bay. Then he added a stereo system that would stand out by clarity. With guidance from the guys at Sounds Good Stereo, Martian fabricated and installed all the components one by one. Once that was completed, Martian’s expertise began with the hydraulic setup. Known as a master of hardlines, Martian fabricated a floating pump rack that hovers 1-inch off the floor and sides. He installed a four-pump CCE setup with steel blocks and 3/4-inch ports and three Adex dumps into the trunk. It took about two weeks of bending 70-inches of 1/2-inch stainless steel lines in the trunk to complete the setup.

It may have taken nine long years to complete the Impala but the time wasn’t right to finish it the first time around. Martian named the Chevy Perfect Timing because it just felt like everything came together the moment he received the call from Large letting him know the car was for sale. “It was like everything was supposed to happen this way,” Martian adds, “It was my Perfect Timing.” Martian wishes to thank his 25th Street Riders family including his painter Keoni for the help to push him when he wanted to quit. A special thanks to the guys at Sounds Good Stereo and James McHugh for all the help along the way. Martian completed 95% of the build himself and can stand back finally and be proud of his achievement.