Newsletter
Sign Up today for our FREE Newsletter and get the latest articles and news delivered right to your inbox.
Home » 1964 Chevrolet Impala SS – Chasing a dream 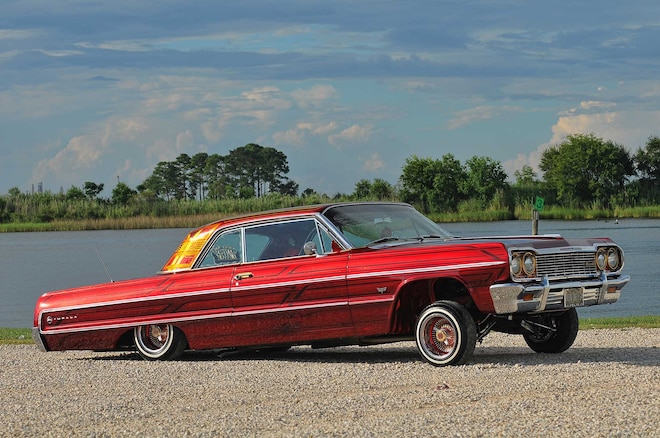 From music videos to the very best movies of the streets, the Chevrolet Impala was the symbol of the lowriding lifestyle. Robbie Collette, like many young kids did, idolized these music videos and movies as he grew up in the small town of Marrero, Louisiana just outside of New Orleans. “I would be at my school desk and fantasize about pulling up in a six-four,” Robbie tells LRM, “It’s a fantasy that I thought I’d never be able to fulfill.” It wasn’t until Robbie turned nineteen that he received his first vehicle, a ’90 Nissan sportscar. Although it was far from his dream car, Robbie made the best of it.

Adding some 14″ bolt-on Roadster wheels and a Brandywine bowling-ball paintjob, Robbie did his best to resemble the style he loved. For the next three years he rolled that style until his car was stolen and he had to start all over. Over the next few years, Robbie purchased seven other vehicles but still didn’t have the bank to purchase his dream Impala. Once he turned thirty-three, Robbie began his pursuit searching online for the car he had dreamed of. His search ended when he found a bright red ’64 Impala with hydraulics in Dallas, Texas. After making the deal and bringing the new Chevy home, Robbie knew that he had to make it his own.

The first thing Robbie changed was the interior because at the first level was his comfort. It was a stock interior so many things needed to be upgraded. He contacted Ciadella Custom Interiors in Arizona to ship all the brand-new material, and Robbie installed it in his friend Angel’s shop. The next step was getting fresh shoes for the Impala, so he contacted Shaggy De La Torre at Shaggy’s Wheels in California where a set of red and gold Zenith Wire Wheels were custom made and shipped. The next step was changing the hardware on all the hydraulic suspension. With the help of Down South Rollers club member Chad Billiot, Robbie rebuilt both pumps, changed out the cylinders and custom built new hardlines for the setup.

Once the setup was working flawlessly, Robbie cleaned up the trunk space by building battery covers to hide the six Duralast Platinums and wrapped the entire trunk in red vinyl. Robbie’s friend Ernest Garza built a chrome Impala logo and placed it in the center floor of the trunk. The back wall of the trunk was customized when good friend Jamon Moga cut out all the wood and had John Booth airbrush the back wall to show Robbie’s pride for his New Orleans heritage by placing the Super Dome in the mural. The next step was refreshing the motor to keep the Chevy hitting the streets with reliability. Mike from Voo Doo Hot Rods was enlisted to replace all the rods, pistons, crank, camshaft and all the rings. The oil pan and transmission pan were given the chrome treatment.

Although the body and paint were pretty solid when Robbie first purchased the Chevy, a change was overdue. The House of Kolor paint remained but Robbie had John Booth from JB Kustoms add the graphics throughout the long Chevy. The leafing and airbrush were added on the dashboard, deck lid, trunk jams, door jams, seat panels and rear bezels around the taillights. The last step was having every single piece of chrome inside and out custom engraved. Ezekiel Garcia from Precision Engraving from Irving, Texas handled all the chrome engraving from bumper to bumper.

During the build, Robbie admits that the first two motor upgrades he changed resulted in both motors blowing on him. “I was cruising on the Greater New Orleans bridge when my brakes went out,” Robbie adds, “It took these moments of despair to build stronger relationships with my club brothers and good friends.” Robbie wishes to thank his Down South Rollers club members as well as his parents for letting him use the garage until he moved out. Special thanks go to Shaggy’s Wheels, Ezekiel Garcia and everyone else who had a hand in helping Robbie fulfil that dream that started as a sixteen-year-old boy glued to the music videos that gave him the motivation and passion for that ’64 Impala, and now he’s Ridin Dirty in the South.