Newsletter
Sign Up today for our FREE Newsletter and get the latest articles and news delivered right to your inbox.
Home » 1964 Chevrolet Impala – Rust Bucket 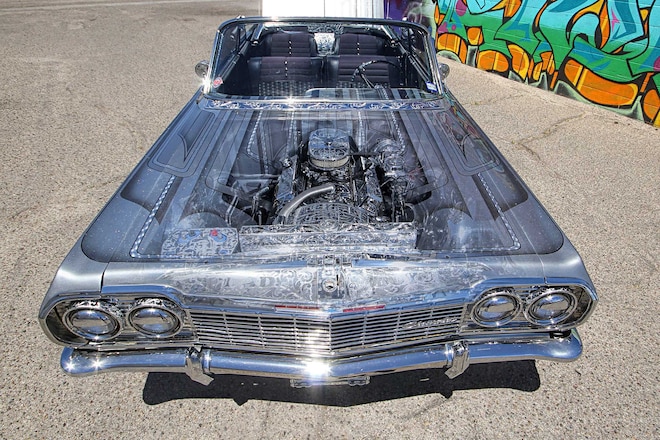 Many consider the ’64 Impala to be the crown jewel of lowriding. It’s a car with familiar yet prominent body lines, and the grille itself has become a class act and one of the main defining points of the vehicle. The car has also become popular in many platforms of car culture. From hot rodding to classic car lovers, the ’64 is a piece of automotive history, but no one seems to love them more than us lowriding guys, and the one you see here is a prime example of what they can become if you’re willing to put some time and money into them.

What you actually see here is a far cry from what it started out as. Just ask the owner, Javier Florez III, and he’ll tell you. The ’64 had always been his dream car and as soon as he had saved up enough money, he picked up a project car which turned out to be a lot rougher than he expected. The Impala had so much rust his wife just shook her head and called it the “Rust Bucket,” but Javier had a vision, so he got to work and started by replacing all the rusted-out panels and doing all the metalwork himself. Towards the tail end of the fix, he patched up the firewall and spent what felt like an eternity long blocking the car to perfection.

Prior to sending it off to paint, Javier had the frame wrapped in preparation for the hydros, and from there it was off to Candy Rush Customs where Chris Palacios laid down a silver base which was layered over with patterns all throughout all the top panels including the dashboard. To help set this car apart from the rest, Javier wanted additional work done, so he contacted Sam Salazar to add some airbrushing down both sides of the body as well as on the hoops of the wire wheels, followed up with another session by Max’s Customs who laid on the silver leafing and pinstripes to accent the patterns. With the exterior buttoned up, Edwards Upholstery installed a brand-new Ciadella interior kit while Krazy Kutting worked their magic either engraving or rechroming just about every accent piece. Once the car was complete, Javier showed his wife and she was in awe with what he had created. It not only met her approval but showed her another side she had never seen of Javier, and they’ve been hitting the streets of Amarillo, Texas, in style ever since.

Body/Paint
Silver base, patterns silver black and gray, silver leafing and pinstriping, airbrushed murals on the side