Newsletter
Sign Up today for our FREE Newsletter and get the latest articles and news delivered right to your inbox.
Home » 1964 Chevy Impala Cruises From New York To Los Angeles 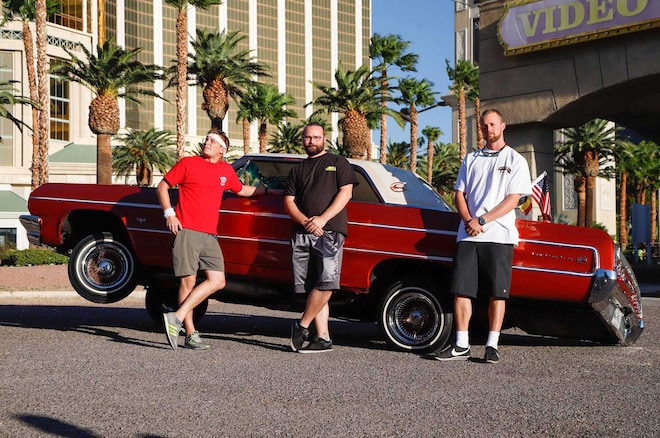 Road trips aren’t nearly as popular as they once were and you wouldn’t typically think of a customized 1964 Chevy Impala as a vehicle to take on the road for multiple days on end. For some, their lowriders rarely venture outside their city limits, but in this instance, racking up miles across the U.S. became second nature.

In the early 1900’s, when the first automobiles were hitting the American market, the road trip as we know it had just begun gaining popularity within the U.S. as a way to escape day-to-day life. Hitting the open road gave Americans a taste of exploring the country, complete with rough road conditions, frequent mechanical breakdowns, as well as exposure to different towns along the way. Even though todays traveling has become more convenient via air travel, the occasional adventurer will still be called out onto the road to tour the land, city by city.

Such is the case for Eric Ogden, a lowrider from New York who decided in 2018 to take his ’64 coast to coast, visiting other lowrider communities along the way. He and his two buddies, Allan Leenen from Belgium’s Exclusive C.C., and Christian Hansson from Sweden’s High Coast Lowlife C.C. set out to meet as many lowrider clubs as possible while documenting the entire road trip on social media.

Before setting out on their journey, Eric and Allen worked tirelessly for two weeks in the Bronx to get Eric’s Impala, GRINGLO, ready for the trip. Once the project was completed, the three men piled into the car and cruised across the country over the span of three weeks from New York to Los Angeles.

The trio posted to social media about their plans and waited for welcoming lowrider clubs to open their doors. The crew was shown hospitality in cities along the east coast, the south, southwestern desert, glitzy Vegas and the West Coast beach cities.

Along “The Low Road Trip,” as Eric affectionately named it, the travelers met with and received mechanical assistance from many lowrider friends they encountered, including replacing the alternator 3 times in addition to 2 broken fuel pumps, 1 busted solenoid, a bent wishbone, and a whole new set of tires, to name just a few. Anyone experienced in lowriding knows how tricky driving his or her prized possession on the open road can be, especially attempting a long and arduous journey across the Lowrider country.

After 451 gallons of gas, Eric, Allan and Christian ended their road trip in Los Angeles, overwhelmed with gratitude and an immense sense of satisfaction that only the Lowrider Community can leave you with. And with that, the three “Low Road Trip” travelers are forever grateful for everyone’s contribution to this lowrider traveling conquest and dream trip come true.

Suspension
3 pump Pro Hopper set up with 10 batteries and 4 switches.