Newsletter
Sign Up today for our FREE Newsletter and get the latest articles and news delivered right to your inbox.
Home » House Of Kolor Purple 1964 Chevy Impala Sets Off A Future Stable of Lowriders 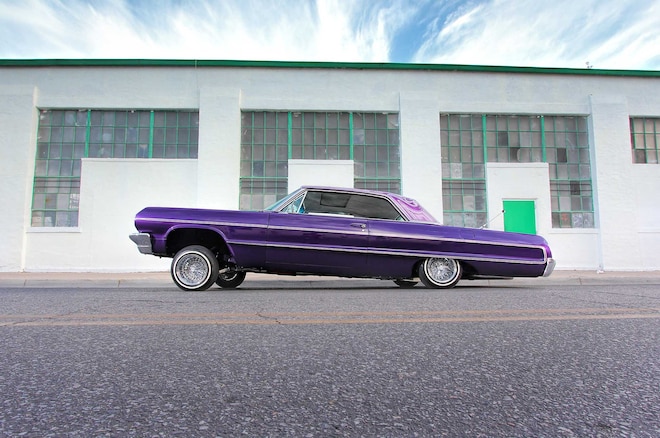 The 1964 Chevy Impala has become a staple in the lowrider game. It’s mentioned in songs, played supporting roles in movies and, with its iconic lines, this piece of Americana is a timeless joint. So, when an accomplished lowrider builder by the name of Gabe Baca wanted to build his first frame-off, he set out in search of the perfect platform, and what he found was a rusted out rolling chassis of a ’64

After the deal was done, the Impala was dropped off to fellow club member Sean Daly at Straight Street Automotive. It was there they replaced the floors, trunk and repaired any small details. The body was then blocked to perfection and once ready for paint, Gabe flew in Pablo from Kandy and Chrome. Upon his landing, Pablo went straight to work and started rendering the paint scheme. He wound up flaking out the roof, a few interior parts and after all patterns were shot, Sean stepped back into play and shot the rest of the car in House of Kolor purple.

At the time, the 2017 Albuquerque Lowrider Super Show was right around the corner and the pressure was on, so he called JD 3 Angels Upholstery to stitch the ghost grey interior and custom trunk panels. From there, the ’64 was sent back to Straight Street, where Sean hard-lined a new hydro setup and installed a freshly rebuilt Chevy 350, and with only a few days left before the show, Sean managed to iron out a few kinks just in time to debut Gabe’s ’64 at the show.

This was just the first phase.

After the show, Gabe had Sean tore the car down again, and this time around he had the underbelly of the body painted to match, while the frame was painted and detailed. The ’64 Impala is a car he’s dreamt of for quite some time, but in the grand scheme of things, his initial goal was to build it so he could give it to his first born. The only problem was they had twins, and since Isiah was brought into this world just a few minutes earlier than Ezequiel, Gabe is going to have to figure out what to give Ezequiel. That’s just a start as he has to start thinking about what he’ll give his daughter Johanna, and his wife Crystal as well!