Newsletter
Sign Up today for our FREE Newsletter and get the latest articles and news delivered right to your inbox.
Home » 1964 Chevrolet Impala Convertible Super Sport – Paid the Price 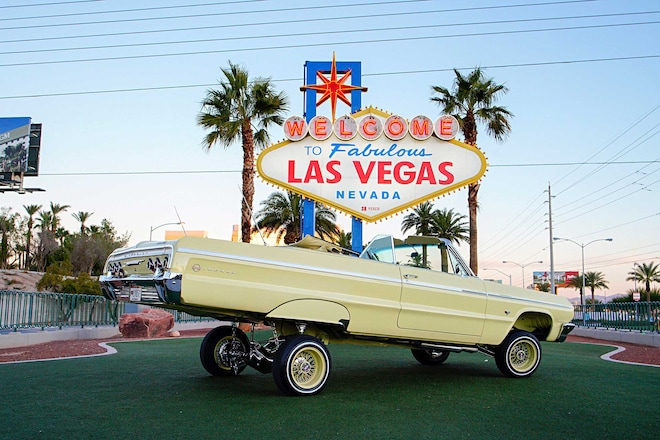 In a city overflowing with endless entertainment, glittering lights, and world-renowned attractions, Las Vegas is the city of thrill. It should also come as no surprise that we’re influenced by our surroundings. So when Las Vegas native Johnny Alvarez built a lowrider, he wanted it to stand out and make its mark.

Now 25 years old, Johnny started lowriding at the young age of 8, when he put together a three-wheel Schwinn bike complete with chrome, candy paint, and custom parts. Over the years, his passion grew and so did his platforms when, with the help of his dad, Johnny bought his first project, a 1994 Lincoln Town Car.

After saving up money to customize the car, Johnny was finally old enough to drive, so he got his license and proudly cruised his car every day to school. Shortly before graduating, Johnny decided to up his game and take his passion to the next level by purchasing a 1964 Impala Super Sport, a car he would trade shortly thereafter for a 1963.

His obsession with the classic Impala began to take shape when Johnny focused all his time and effort to get it show ready. During this time, he became fully invested in the lowrider lifestyle. From installing hydraulics to hunting for custom parts, Johnny didn’t take any shortcuts. Once “Vegas Blues” was complete, he sold the 1963 Impala to the highest bidder in Arizona.

While the cash was cool, Johnny couldn’t shake off the urge to own yet another Impala, and since the third time’s a charm, Johnny reinvested his hard-earned money into a show-ready classic. A friend helped him find the 1964 Impala convertible at Switch Hitter Hydraulics. The owner of the shop was reluctant at first to sell one of his personal cars. In a town like Las Vegas, money talks. So once the deal was sealed, Johnny “Paid the Price” and decided to give the affectionate name to his new lowrider.

As husband and father of two kids, Johnny finally reached his dream of owning the ultimate show car. In true car culture fashion, a new car club was born from his latest purchase. He’s looking forward to cruising down the boulevard with the top down on hot Vegas nights while continuing to build his club’s reputation.

Interior
Original patterns and materials along with digital dash