Newsletter
Sign Up today for our FREE Newsletter and get the latest articles and news delivered right to your inbox.
Home » 1963 Chevy Impala – A Brother’s Love 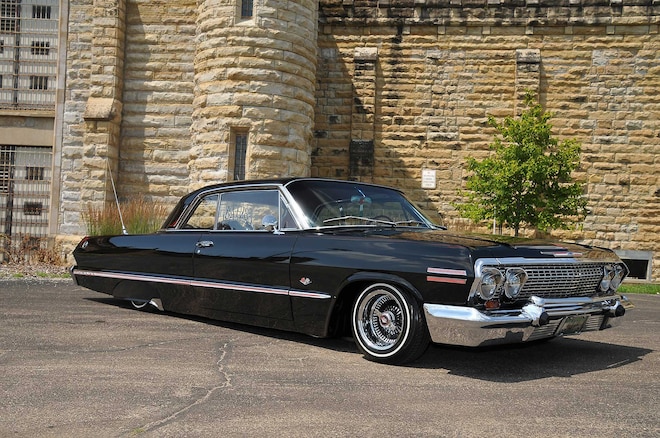 A bond between brothers is unbreakable and Alex Ornelas and his older brother, Richard, also known as “Mick,” had nothing short of an incredible relationship. While growing up, they dreamt about lowriding through the streets of Michigan where they grew up and even used their parent’s ’64 impala as a source of inspiration as they sat in their rooms fantasizing about the day they, too, would have one done to their liking.

As adults, the brothers remained very close, playing sports, and making time for each other during the weekends. Then something unexpected happened one day while Mick was playing baseball. While on the field, Mick felt ill and rushed home to get some rest and never woke up after suffering a major heart attack. Alex was devastated. Mick was not only his brother, but his best friend, and the tragic incident happened so fast that it left him in shock. Looking to keep their memories and ambitions alive, Alex eventually began searching for a Chevy Impala to make their dreams come to fruition and that’s when he found an untouched 1963 Chevy Impala just over a hundred miles away.

The proud owner of the vehicle gave him an in-depth background on the history of the car and along with it, he had a few questions for Alex. The owner asked, “You’re not going to turn this into one of those lowrider cars are you?” To which Alex replied, “Of course not.” Alex knew he had to play the field to not spoil the deal, and after taking it home the very next day, it was treated to a full detail and fitted with a set of wire wheels before he began a full restoration.

Although there wasn’t anything wrong with the Impala, it was showing signs of its age, so the car was gutted. Every panel was removed, every wire stripped, and the body was separated from the frame. Alex repaired a few minor rust spots, and after the final prep was done, it was time for the paint process to begin. Since Alex is a painter by trade, he wanted this car to be special and wanted to challenge himself, so he shot the car in one of the hardest paints to master and chose Pure Black by BASF.

With the exterior polished to perfection, he treated the bare body to a layer of Dynamat for sound and heat control. Tthe next step was rewiring everything under the dash and laying down new carpet. Every piece inside the cabin was polished or painted to match the cleanliness and classiness of the build while a few custom lowrider touches accent the interior to give it a more personal feel.

Although you never want to think about cutting into a perfectly built car, Alex contacted his club brother Kenny Baker and together, they added a two-pump Pro Hopper setup in the garage bringing the long classic to the ground at the hit of a switch. As for the motor, the original tired 283 had to be removed, and with the help of his good friend Dan Easterling, they installed a crate Performance 350 that was painted House of Kolor Kandy Apple Red.

Once the Chevy was completed, Alex decided the best way to pay homage to his brother was to honor him the way he would want, so he flew in premier pinstripe artist Sammy Acosta to add custom pinstripe and leafing throughout the Chevy. Alex then contacted local airbrush artist Kevin Burdick to lay down a perfectly fitting mural of his brother Mick on the trunk. “Every time I look at my Impala, I see my brother right next to me,” Alex adds, “We made it Mick, we finally made it.” And fittingly enough, the car was given the name, “A Brother’s Love.”

In closing, Alex wishes to thank his strong and loving support system starting with his wife, Rachel Peterson, Kenny Baker for his assistance, Dan Easterling for the help under the hood, and Phil Gordon for making the Ornelas brothers dreams come true.