Newsletter
Sign Up today for our FREE Newsletter and get the latest articles and news delivered right to your inbox.
Home » 1963 Chevrolet Impala SS – Roadblock City 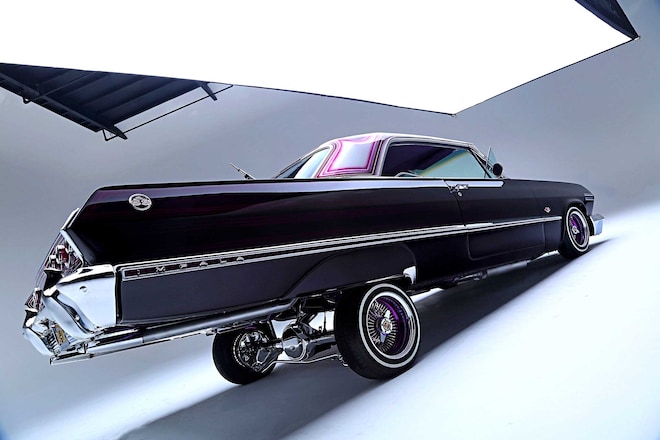 Jaime Gonzalez admired his older brothers. As a kid, much of his time was spent watching them wrench on their lowriders and as the years passed, he knew the lifestyle was something he’d be a part of. That day came a few years later when he picked up a ’62 Impala. It was a short term fling (since his dream car was a ’63) and after tinkering around with it for a bit, he wound up selling it to a friend who in passing mentioned that he also had a ’63 that was sitting around. Needless to say, Jaime shot on over to his house and that’s when he came face to face with a ’63 Impala that was in running condition and primered.

With the deal done, it was hauled back home and Jaime wasted no time. There was no maiden voyage, there was no shakedown, Jaime went straight to stripping the car and unbeknownst to Jamie, that one day led to restoration that would span the length of almost two decades.

Having already owned a few lowriders, this build was special so he decided to plan out his first frame-off build. “We would work on the car after work and on weekends,” says Jaime. During the first phase, the car was being prepped and worked on by Jaime and the painter, but after the painter disappeared and left the work incomplete, he decided to keep the project moving by sending out the suspension parts for chrome and powdercoat. He then sourced a second painter who finished the bodywork, and right after painting the belly is when he got more bad news. It turns out the painter had moved, so the property owner called him and told him to pick up his car. Again, Jaime was left with an unfinished car so he found a third painter, and that’s when Jaime says, “I found the third painter through a friend of mine and the day before I went to drop it off, I lost my job.”

At this point, Jaime didn’t even know what to do. He contemplated selling the project after running into one roadblock after another, but after a conversation with friend and fellow club member Eric Lozano, he was motivated to keep working on it and 17 years later the car has become symbolic of hope and persistence. In the end, Jaime sums up the experience best when he says, “This is a labor of love! The journey was challenging but it’s one that I would never change or forget!”

Body/Paint
House of Kolor Candy Purple with Black Pearl base.