Newsletter
Sign Up today for our FREE Newsletter and get the latest articles and news delivered right to your inbox.
Home » 1963 Chevrolet Impala – Pura Sangre 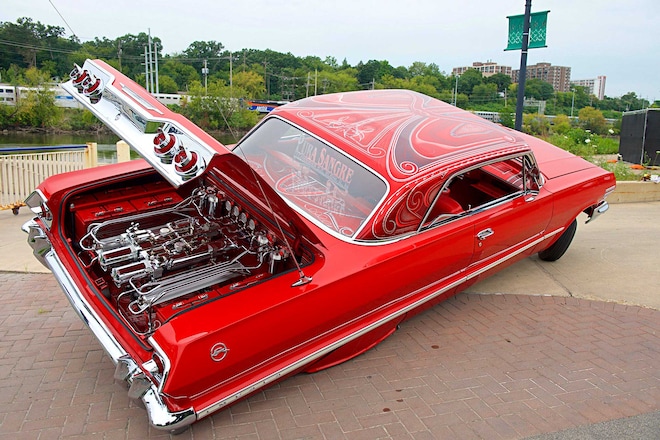 For Joe Martinez, lowriding is more than a way of life, it’s a family affair. It’s what drives them and what keeps them together. Joe’s introduction into lowriding began at a family outing when his cousin introduced him to the scene back in 1983. “I was 10 years old at the time and my cousin let me drive his 1965 Chevy Impala up and down the driveway,” Joe says. “I was hitting switches front and back and after that I was hooked.”

Four years later the experience stuck with him, and thanks to odd jobs coupled with moral support from his father, Joe came up with enough cash to start customizing his very own 1977 Monte Carlo. As the years passed, Joe continued buying, chopping, tweaking, and installing hydraulics, and what was once considered a hobby quickly turned into an obsession.

Fast-forward to 1997 when Joe met the legendary Hollywood Bob of Hollywood Kustoms. “After I watched him build a 1963 Impala I knew that no one else would touch my cars except Hollywood [Bob],” so when Joe finally purchased his 1963 Impala in 2012 it was sent straight to Hollywood’s shop where it was transformed into the car he calls “Pura Sangre.”

Every element of the build is a work of art, and a quick walk around the vehicle reveals plenty of custom touches. But take a peek inside the trunk and what you’ll find is a treasure chest equipped with a custom hydraulic system framed by batteries, gauges, and artistically hardlined in perfect symmetry. No detail is overlooked, no bolt unpolished, even the engine was meticulously rebuilt and fully chromed. One of Joe’s key inputs to the build was the addition of digital battery voltmeters, which monitor the power from the hydraulic batteries, an addition Joe says, “In over 30 years of lowriding, I’ve never seen anything like that.”

Montoya Custom Auto contributed a showstopping roof and interior paintjob loaded with kandys, pearls, and flakes while pinstriping was laid down by Jerry Chingas. As for wheels he didn’t want just any off-the-shelf wire wheels, he instead restored a set of original 13×7 Truespoke wheels from 1981.

For Joe, family and lowriding go hand in hand, and his lowrider has been an instrumental part of the program. He took his fiancee Andrea out on their first date in the car, and while she was pregnant with their son Jacob in 2007 is when his family decided to come up with their own car club, which they all agreed would be called Pura Sangre—which loosely translates to blood-related-and a fitting name since the club is made up exclusively of family members and the same named Joe used as a moniker for his car.

Pura Sangre shows us that the seemingly impossible is possible when your family has your back. “The lowrider lifestyle comes with a lot of dedication, hard work, and sacrifices. There are things you can’t do and vacations you can’t afford to go on, but my wife and son support me. They are part of the lowrider culture.” When we asked Joe if Pura Sangre was complete, he was quick to tell me that a lowrider’s work is never over. “Pura Sangre is five years in the making, but it’s always a work in progress. I’m always thinking about something else I could tweak or something new I can add. It never stops.” Joe summed it up by saying, “I want to die with memories, not dreams.”

Body/Paint
Victory Red on the body; Michael Montoja of Montoja Customs of Kankee, IL, patterned out the roof and interior with loads of kandys, pearls, and flakes; pinstriping by Jerry Chingas