Newsletter
Sign Up today for our FREE Newsletter and get the latest articles and news delivered right to your inbox.
Home » 1963 Chevrolet Impala – Eazy Duz It 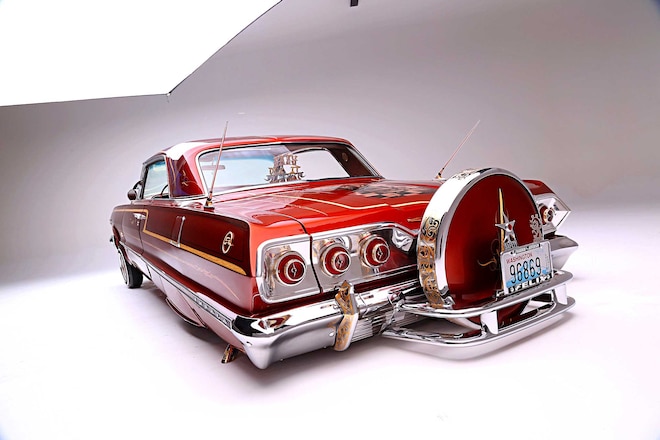 Back in 1978, Wallace Pardo Jr. found himself at his first car show. It was held at the Rivergate Casino (now currently Harrah’s), and it was there he encountered something he had never seen before: turntable cars. Almost immediately he was mesmerized by the attention to detail and was in pure disbelief. “I saw a car that was so clean and spinning that I vowed that evening that I would one day have one of my own,” Wallace says, as he recalls his experience.

It would take decades for that day to come, and it all started when he found a 1963 Impala left in an Oklahoma field. At $4,500 it was a deal nonetheless, but even at that he didn’t have the money, so he borrowed it from his good friend Curt Hall.

When it came time to start the revamp, the Impala was shipped to Arizona where it sat in limbo for the next few years. Around the same time, he befriended Keo Sanh during an online conversation. The two had much in common as Keo was building a hardtop 1963, so the two agreed to team up and help each other out. During the process they swapped a lot of knowledge and leads and once Keo’s ride was finished, Wallace shipped his car to Seattle to be built by the guys from Eazy Duz It and Riel Time Restoration.

After reinforcing the frame and test-fitting the four gold/chrome HiLow Elite pumps, the body was doused in a candy root beer paintjob. As you take a 360 view of the car, you’ll find a period-correct Ciadella interior, an LS1 nestled into the engine bay, as well as plenty of chrome and polished parts, including visible A-arms that have been wrapped, engraved, and treated to a two-tone gold and chrome finish.

With the car now done and complete, he’s not only fulfilled a dream but taken a once-abandoned Impala and given it a new lease on life with a cultural twist.