Newsletter
Sign Up today for our FREE Newsletter and get the latest articles and news delivered right to your inbox.
Home » 1963 Chevrolet Impala – 10 Months 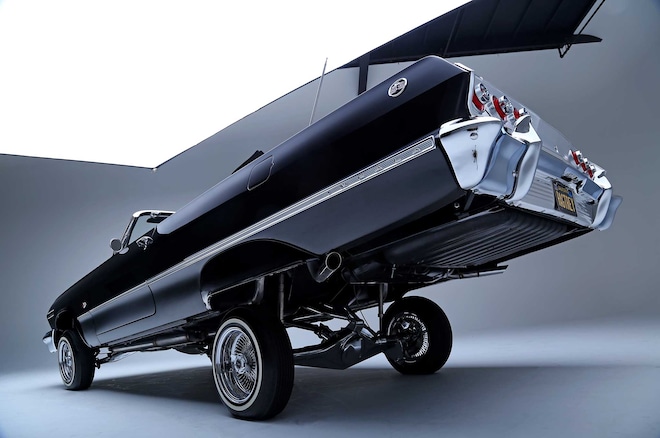 Ask a lowrider collector like Pinky which classic car has the cleanest body lines, and he’ll tell you it’s the ’63 Impala. In fact, he’s admired the car long enough to know he wanted one, so he put his money where his mouth was and did just that and didn’t have to look too far. It turns out he had a friend that had one sitting out in the blistering sun of Arizona. The weather had taken a toll on the car, but the body was clean, so he negotiated a deal and had it shipped to his house in El Monte, California. Upon its arrival, he found the trunk stuffed full of parts, and as he tried to make sense of the pile, he soon realized he would be needing all new parts so his search began.

After acquiring the parts, he reached out to all his old contacts who helped him with his previous build. It was a no-brainer to use most of the same crew, and it’s with good reason—that car they had collectively built landed a feature in the 2015 issue of Lowrider magazine, and if you’re curious as to which car it was, well, it was the Salmon-colored, LS-powered 1959 Impala we featured in the December 2015 issue of Lowrider.

He was happy with the results of that car, so the first thing he did was take it to the folks at Classic Garage to have the Impala painted a deep black. The frame then went to V-Max where his team at Ultimate Hydraulics dropped in a LS3 engine, and according to Pinky, the dependability of his ’59 with the LS was incredible, so he had to do it again on the ’63. From there, Pinky installed the double whammy setup himself before sending it off to California Upholstery to have an original interior kit installed with a few custom touches.

In the end, it took Pinky only 10 months to complete this flawless ride and when you consider his track record, it’s safe to say that this won’t be his last either.