Newsletter
Sign Up today for our FREE Newsletter and get the latest articles and news delivered right to your inbox.
Home » The “Roll Playerz” Brandy Wine 1962 Impala Wagon That Found its Rightful Owner 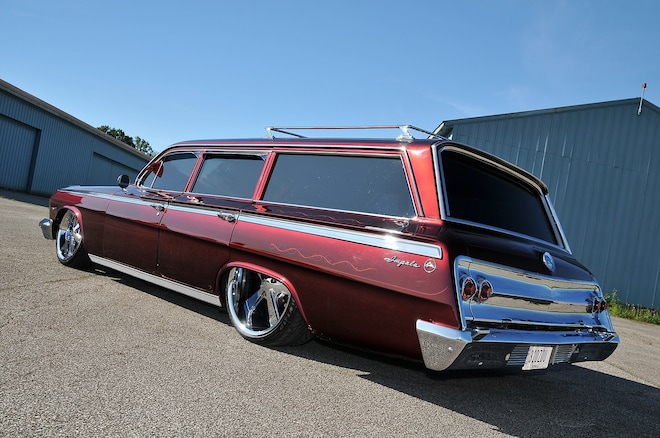 The 1962 Chevy Impala wagon is such a refreshing sight. While not as popular as its convertible and coupe counterparts, the Impala wagon is nonetheless a unicorn. So, when Sheila Rehburg found out her friend Greg traded his ’62 ‘vert for a wagon, she shot over and soon found herself spending hours at a time at his house. At first sight, Sheila says the car spoke to her like no other vehicle ever had, and states, “I remember seeing the color and the shape and I would do anything to drive that wagon.” Quite the statement, especially when you consider that Greg is a car true collector with a stable of 25 vehicles on hand.

For the first few months, Sheila would hound Greg about taking the car out to which he’d oblige. Soon, her visits became more frequent; she would even borrow it on the weekends, use it for daily chores, grocery shopping and family picnics. “It almost became Sheila’s car,” says Greg, and adds, “It was just sitting in my garage, so I was glad someone was enjoying it.” Yet of all those moments, the most memorable had to be when she borrowed the Impala to use as a wedding car for both of her daughters’ weddings.

As years passed and parts had to be replaced, Greg added a full air ride management system that would lift the Chevy high or drop it down low. Under the hood, he juiced up the power by switching from the 3-on-a-tree to an automatic 700r4 transmission. He then had a ’76 Monte Carlo 350 installed along with a new intake, a four-barrel Edelbrock carb, and an HEI Ignition for a much smoother ride. The wagon’s rusted wheels had been replaced with a set of KMC Novas, using 20’s upfront and 22’s tucking in the back. All of these mods made Sheila love the car even more.

After each outing, Sheila would tuck the car back in Greg’s garage and put the keys back in the proper spot. It became a long-standing ritual until one weekend, things changed forever. After a casual weekend cruise with her husband, Sheila was parking the car back inside Greg’s garage as she always did. That’s when Greg came out and told her to just keep it. Knowing that she was in love with the car, he felt it would be better for her to own it, rather than always having to pick it up and put it away. In shock, Sheila insisted she would pay more than fair market value, but Greg had no intention of taking a single cent.

As of this writing, Greg finally agreed to take a smaller payment, which Sheila insisted was the right thing to do; but as a long-time family friend, Greg is just happy that the wagon is being enjoyed the way that it should. Sheila and her husband wish to thank Greg Mease for being such an amazing and kind friend, with a special thanks to Denny Kirkland, Ryan Rable, Dallas Runner, and Greg’s ex-wife for those long hours in the garage.