Newsletter
Sign Up today for our FREE Newsletter and get the latest articles and news delivered right to your inbox.
Home » Giving Up A Mint ’64 To Take On A 1962 Impala Convertible In Need of Major Work 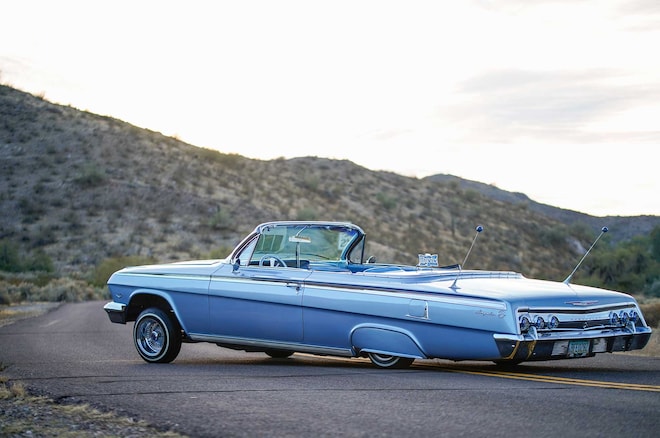 The tale of this 1962 Chevy Impala convertible can be traced back to the very basics of childhood. Catching the eye of an 8-year-old is easy, but keeping their attention is a whole different story. As it is, children are easily fascinated by the adventures, sights and sounds of this bubble we call earth. But like many lowrider enthusiasts, Jose Garcia’s love for lowriding came at an early age by way of a neighbor, and that obsession turned into a lifestyle that he couldn’t’ shake.

It all began when he used to watch his neighbor washing his Grand Prix. From there, his interest piqued and he found Lowrider Magazine. This became his new obsession, and as he flipped through page after page, and shuffled from one copy to the next, he began envisioning the way he’d one day build his car. From the wire wheels to the paint schemes, his future lowrider was already in the works and by 2001 he would go on to join Majestics CC (Casa Grande). By that time, Jose learned to paint and lay patterns starting with his 1980 Chevy Malibu. From there, his attention turned toward a 1964 Impala that was built from the frame up, but that’s when he ran across an ad that changed his life. The ad was for his dream car in a ’62 Chevy Impala convertible that was in dire need of a complete restoration. Not one to shy away from a challenge, Jose stepped to the plate and made a trade.

Jose set forth on this new journey which began with a complete overhaul. On the mechanical side, Toons Auto Works rebuilt the 327 V8, molded and chromed various suspension pieces and in the process, installed a 2-pump Pro Hopper hydraulic setup. Toons then straightened out all of the body panels and doused it with Matrix sky blue and silver pearls, followed up by fine line artistry done by Chavos Pinstriping, who utilized royal blue and silver lines on the trunk and interior with an additional mural of Mexican Charras done by Tim Lowery.

To keep the ’62 gleaming, Jose entrusted Capital Chrome to bring luster back to the moldings, undercarriage and engine, along with the hydraulics. Lime Wire and Jose Hernandez were responsible for the engraving while both Jaime Guanajuato Sr. and Jr. stitched up the Ciadella interior. Additional touches include a full army of Pioneer speakers inside and 13-inch Daytons on the outside, and the car was done just in time to debut at the 2015 Lowrider Super Show.

As an impressionable young man, Jose dared to dream big, but along with patience, dedication and laser sharp focus, he not only built an incredible ride, but turned his dreams into a reality that we all get to enjoy!

Body/Paint
Royal blue 2 stage paint with pinstriping and murals on both the truck and center console.