Newsletter
Sign Up today for our FREE Newsletter and get the latest articles and news delivered right to your inbox.
Home » 1962 Chevrolet Impala SS Convertible – The Backburner Project 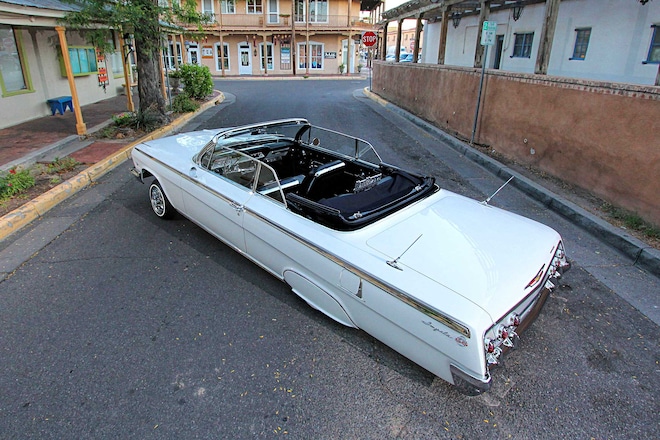 When Anthony Martinez first laid eyes on the 1962 Impala SS convertible she was perfect. She was older but in good shape, 100 percent complete, but as with any project, well, the truth eventually revealed itself.

It all started when he came across the car on Craigslist. He couldn’t pass it up, and even better was that it seemed to be in good running condition, so he made the deal. With plans to do a frame-off restoration, he started the build by having the body lifted off the frame. Finding the typical rust conditions that inflict a classic car, he had the floors replaced, and that’s when he received the call. The shop working on the car was closing its doors, so he had to haul it off to storage while he searched for a new place.

As time passed and the memories faded, he got sidetracked by two other builds-a 1957 hardtop and a 1958 convertible (the 1958 wound up landing a Lowrider feature in 2017). After these other projects were complete his attention turned back to the 1962.

Since Joseph Leyba from the Blast Factory had proven himself on the other projects, he became the chosen one to work on the neglected 1962. While the car was off at paint, the chrome and stainless steel pieces were sent out, and the transmission and 327 engine rebuilt. In the process, every nut and bolt was either restored or replaced, a complete air-ride system installed, and a set of 13×7 Daytons with 520s were waiting in queue. After the body was reinstalled and Anthony was done wiring the car, Chitos installed a new Ciadella interior and the trunk fitted with custom panels that were upholstered.

In final form, the long-awaited return of this 1962 was worth the wait, proving once again that lust never lasts but love does.