Newsletter
Sign Up today for our FREE Newsletter and get the latest articles and news delivered right to your inbox.
Home » 1962 Chevrolet Impala – Psychedelic ’62 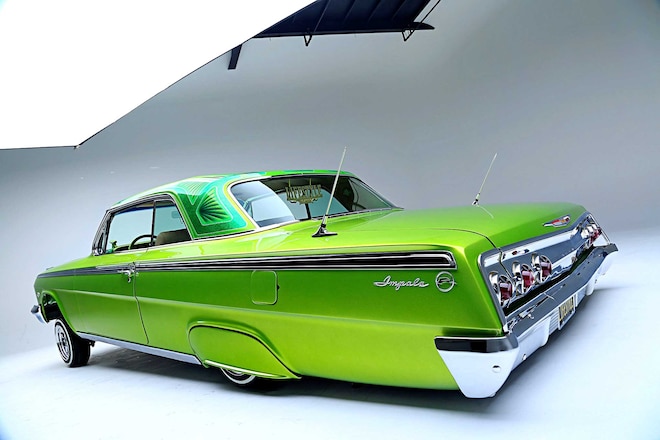 As a toddler, Gilbert Ramirez attended car shows with his father, but nothing actually stuck with him until he became a teenager. By that time his fascination with lowriding began to grow, and through the influence of his father and the friends he had made on the scene, Gilbert didn’t just want to build any car, he wanted to build a lowrider that could hang with the big dogs. Then again, that should come as no surprise since his father is Big Fern, the man who has long been a fixture in the lowriding scene, a Lifestyle Car Club member, and owner of the famous “Moonflower.”

By the time Gilbert was ready to build a car of his own he had to narrow down his options. “It was between a 1962 or 1964 Impala but in the end I [decided] to go with the 1962,” Gilbert says. Once the decision was made, he put the word out that he was looking for a 1962, and his friend Bobby Jauregui told him about one that was for sale in Arizona for only $1,500. It was a rolling chassis that came with the body, doors, fenders, hood, and trunk, and for its age is was well-preserved, with just minor rust and the need for a new trunk pan that was damaged. It was the perfect platform for Gilbert. He adds, “It was exactly what I was looking for, and the best part is that after we ran the VIN it came up that it was a Los Angeles factory-built car.”

To give this Impala a new lease on life, they began by shaving the wipers, cowl, and firewall before laying the custom candy mix. Next was to have the frame reinforced to handle the double-whammy setup, while a crate SBC 350 was dropped in at the same time the interior was getting stitched together. In all, it took him five years to get the car completed but each and every bit of the experience is memorable. “It took a lot of time, money, patience, and just about every feeling imaginable to build this car,” Gilbert says. The hardships taught him to appreciate the car for what it is and allowed him to spend plenty of quality time with his father as they sat in the garage wrenching away.

With the car complete, it was only right to give his ride a nickname. He came up with “Psychedelic,” a name he chose because it’s not only the name of his favorite album from Psycho Realm but a reference to his addiction to lowriding.