Newsletter
Sign Up today for our FREE Newsletter and get the latest articles and news delivered right to your inbox.
Home » 1962 Chevrolet Impala – El Sol 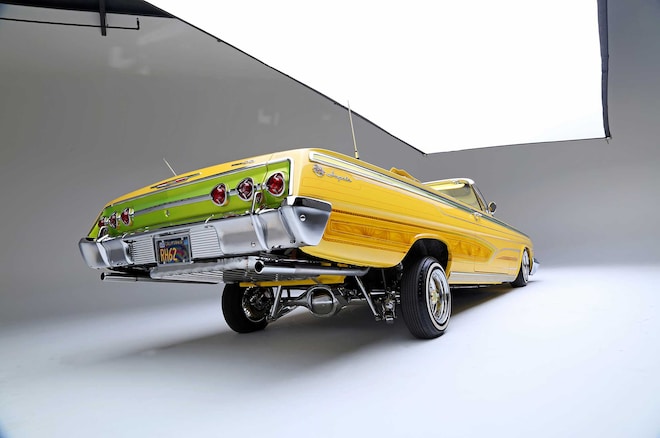 This 1962 Impala convertible was baptized with the name of “El Sol,” which in English translates to “The Sun.” So, was the name chosen because of human’s fascination with the sun? Or was it named after the most powerful sun god in ancient Rome who goes by Sol Invictus? Well, the answer to both of those questions is no. He named the car El Sol after the Mexican beer Sol which has the striking similarity that his paintjob shares with the color of the beer.

It all started when he purchased the ’62 rag in 2018 from the second original owner. He immediately took it to Louie Carrillo to get a fresh paintjob, and since the car was already in excellent condition, it didn’t take long for Louie to finetune the bodywork before he began laying down the candy yellow paint. He then added fan patterns on the body in orange and gold and laid candy lime green on the rear trunk and side moldings. The car was then transferred to Rafael’s roofing shop where he began the assembly. After three months, the body was back on the frame and that’s when Mike Lamberson was called in to add leafing and striping while Tim Lowery was called in for the casino-theme airbrushing on the firewall.

Fellow club member, Bobby Enz, assembled the flawless 350 engine while M&M Hydraulics put together the double whammy setup. The last thing was to take the car to California Upholstery to have the interior and trunk panel done. California wrapped the Lexus seats in yellow and green leather, and the final touch was to bring it back to the shop where they cleaned up the belly and sprayed it in gloss black.

After a year’s worth of work, the build was completed. He had built the car to enjoy with his family and couldn’t wait to take them for a spin through Santa Ana. “They were my motivation and cruising with them has been my highlight.” Rafael is proud of the build and the work that was put into the car, and the only thing he might do is repaint the belly of the car to match the rest of it.

Sound
Alpine double-din stereo with an Alpine amp and speakers.