Newsletter
Sign Up today for our FREE Newsletter and get the latest articles and news delivered right to your inbox.
Home » 1962 Chevrolet Impala Convertible – A Star Is Born 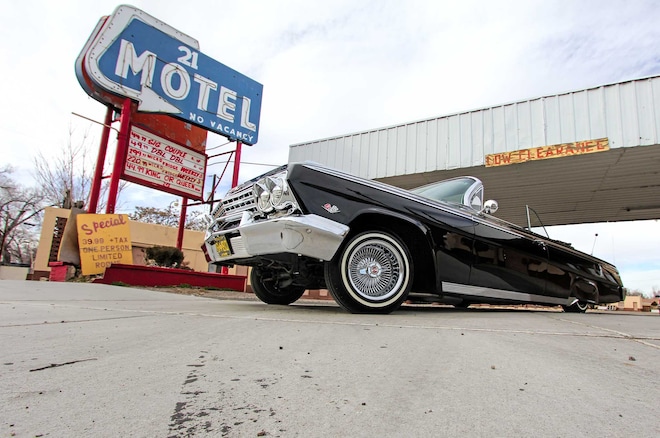 Back in the Early to Mid 90′ the cruising scene in Albuquerque was very Strong. We would cruise route 66 (Central Ave.) from Atrisco up to Coors and then through Sonic to the wee hours of the morning showing off our rides. Matt Otero caught the Lowriding bug back then and it has turned into a kind of disease for him. He was cruising a mini truck back then and over the years has owned many custom vehicles. His current car he calls “The Celebrity” a 1962 Impala convertible has been a dream of his since he used to help his dad John Otero work on cars when he was younger. When he heard that an old friend was selling a ’62 convertible project he wasted no time making a deal. He immediately took the car Albuquerque Classics to start the restoration process. The crew took their time getting the car straight for the Jet black paint job that Matt had always dreamed of. With the car still drying it went over to Gotcha Covered for some new upholstery and top. Mario even made some custom panels for the trunk to cover up the airide set up. The crew also got all the windows working properly along with some other odds and ends. With the paint finally cured it went to Matt’s shop, All Pro Detail for a thorough wet sand and buff job. Once it met Matt’s strict standards it was time for the final assembly. With the help of Ken Jacquez all the fresh chrome and stainless was reinstalled. Matt then added a Set of 100 spoke Zeniths to get the car cruising in style. The car far exceeds his child hood dreams and just like in his younger years Matt still enjoys Cruising Central jamming to some oldies. But now it is in a beautiful classic Chevy.

Suspension
Original with Air Ride in the rear