Newsletter
Sign Up today for our FREE Newsletter and get the latest articles and news delivered right to your inbox.
Home » 1962 Chevrolet Impala – Breaking the Mold & Breaking Bad 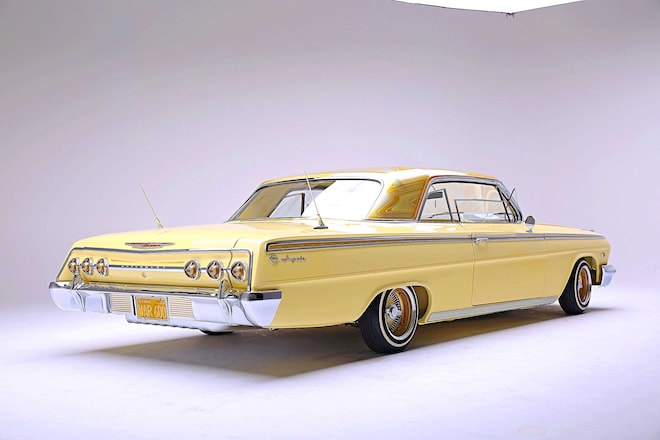 Life has a funny way of teaching us lessons. In an almost cruel and intentional manner, life will play games with us and in the end teach us to focus on the work and the vision instead of the reward.

Take for example the guy who set out to be a millionaire—who’s probably still working at it. Now on the flipside, we all know that guy who stayed in his lane, mastered his craft, and as a result of his dedication and resilience became just that—a millionaire. You see, we do get what we focus on, but the rewards come as a result of laser-sharp focus and resilience. Much like you can’t become a millionaire without being an expert at your craft, the same principles apply to building an award-winning show car, and Eric Wisterman is a great example. You see, Eric never set out to capture the “Lowrider of the Year” title. Instead, he wanted to create a car that would serve as the quintessential example of what a lowrider should look like and he wanted to challenge one person—himself.

Having known Eric prior to busting out his now world-famous ride, I can serve as witness to his rise in the game. At the time, he had an all-original 1963 Impala that won “Original of the Year” for the third time back in 2010. With a car that clean one would think that it would be a “keeper” but soon enough he traded in the flawlessly restored 1963 for a 1962, which was ultimately transformed into the gem you see here.

“On my way to making the trade, my truck kept breaking down and we would always end up fixing it on the side of the road,” Eric says. While they eventually made their way to Arizona to make the deal, they wound up hiring a transporter to take the car back. “Once I had the car in my possession, I knew I had to redo everything on it,” Eric explains. To begin the transformation he, along with his friend Atanacio, began by stripping the car and prepping the roof, dash, and package tray so Pablo of Kandy-N-Krome could lay down the patterns. The body was then removed in order to mold the frame.

With the body off, Alberto Herrera was called in to do a themed mural on the firewall. Inspired by the smash hit Breaking Bad, Eric remembers having the two artists stay over at his house until the job was done. While the two worked their magic, he decided to work on the engine and that’s when he called on Rex Hutchison to build him a 383-stroker that cranked out a cool 500 hp on the dyno. After receiving the short-block back he smoothed it out along with the 700-R4 transmission and had Pablo paint it so the patterns flowed together along with other engine components.

When it came time to build out the suspension, he had Mike Ishiki build the single TW Pesco 777 fan motor pump that was paired to four Adex dumps and three ZigZag slow downs. From there, 5 Star Upholstery stitched the vinyl interior and installed the four-bucket seats that were retrofitted from a 1993 Lexus, and along with it he had a custom console and headliner installed as well. Everything on the car was redone except for the light yellow paintjob, and after two years of being built in a one-car garage, it was complete and ready to show.

“I had tested my abilities on building an all-original car and I wanted to see what I could do on a full custom build,” Eric says. After a year of showing the car, he decided to add a touch of engraving and called in Jaime Castaneda for his handiwork. Additionally, he had Hernan D’Aloia laser engrave the Breaking Bad 1962 logo on knobs and accent pieces found throughout the car.

Since unveiling his ride, “Breaking Bad” has not only become an Internet sensation but an iconic build that will go down in history as “One of the Greats.” Aside from winning the “Excellence Award” at the Las Vegas Super Show (right before we did the shoot), he has taken home some highly prestigious awards, such as the “Best Custom” and the “Master Builder” awards at the Houston Autorama. But when asked what he’d do different, his response was one that took him back to his roots as he says, “If I could redo anything, I would probably build a nice driver instead of a full show car.”

So let the lesson be learned that you reap what you sow, so focus on the results instead of rewards and the rest will fall into place. Just ask Eric—or Walter White—because they’re great examples of how laser-sharp focus can get you where you need to be.