Newsletter
Sign Up today for our FREE Newsletter and get the latest articles and news delivered right to your inbox.
Home » 1962 Chevrolet Bel Air Station Wagon – Father Knows Best 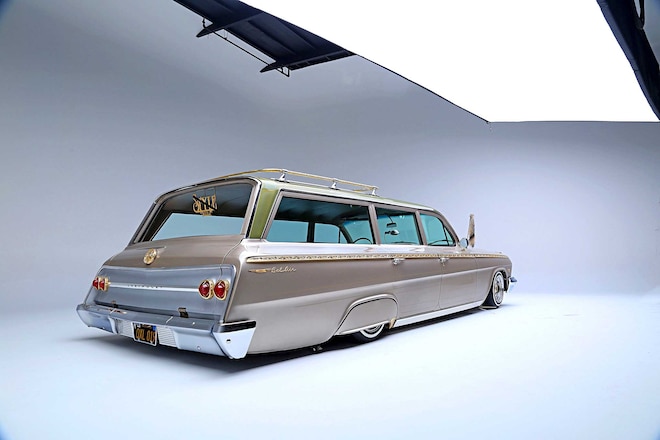 Car culture is an interesting lifestyle. Typically, it’s a solo sport designed and concocted by the individual with the dream but when it comes to father-son projects, I don’t think there’s any other form of car culture that makes it happen more often than lowriding—then again, lowriding has long been a family oriented lifestyle. It’s what drives our culture forward, it’s what inspires the next generation, and today we’re bringing you a father-son build that started off shaky but wound up being a beautifully orchestrated lowrider that’s worth its weight in gold—oh and proof once again that father knows best.

The story of this 1962 wagon began years before its purchase, as the then 16-year-old Keith first started off with a two-door 1962 Impala. “I was ecstatic to be 16 and have an Impala as my first car,” Keith says. And while a 1962 Impala isn’t something most teenagers get excited about, for Keith it was a dream come true.

Having spent most of his life in and around lowriders, Keith says, “Since I was able to turn a wrench, I’ve been in love with lowriding and the lifestyle.” But the dream didn’t last long. After three months of ownership, Keith’s father decided to sell the 1962 Impala. “We were on a family trip in Las Vegas when my dad told me he was selling it.” Needless to say Keith was upset up until his father began laying out the master plan. “He told me that someone had hit the magic number [came correct with offer] and then showed me what we would be buying in return.” And what he showed him was a 1962 Bel Air wagon that was in showroom floor condition.

To get the deal done they cut their Vegas trip short to make it back to their shop in Ontario, California, and once it was sold they were off to Simi Valley to look at the wagon. “The wagon was in supreme, original condition, so much so that it still had the original seats with factory plastic on it,” Keith says. The owner was moving to Oregon and needed to get rid of it. “Buying the wagon reminded me of the one from the Wonder Years and that’s why we named it ‘Winnie.'” They drove Winnie two hours back home and she ran like a champ. They wasted no time taking it apart to make it their own.

In the course of a couple of months, a ton of work was done, including a two-tone paintjob, a reworked motor, wire wheels, air-ride system, and a banging stereo system. After hitting a few shows, Keith Sr. found a roof rack for it, and that started phase two of the build. They brought in Coast One to pattern the top. All the moldings were removed and sent out to get chrome or gold plated, with a few of the pieces being engraved by Edgar Castaneda.

With a fresh new look, they drove Winnie to San Diego for the “Day at the Bay” show, which is when motor troubles gave them the chance to drop in a 383 stroker motor with all the bells and whistles. In all, the entire process took about five months and it wouldn’t have been possible without his father’s knowledge and experience—as well as his decision to sell the 1962.