Newsletter
Sign Up today for our FREE Newsletter and get the latest articles and news delivered right to your inbox.
Home » 1961 Chevrolet Impala – The Ace of Spades 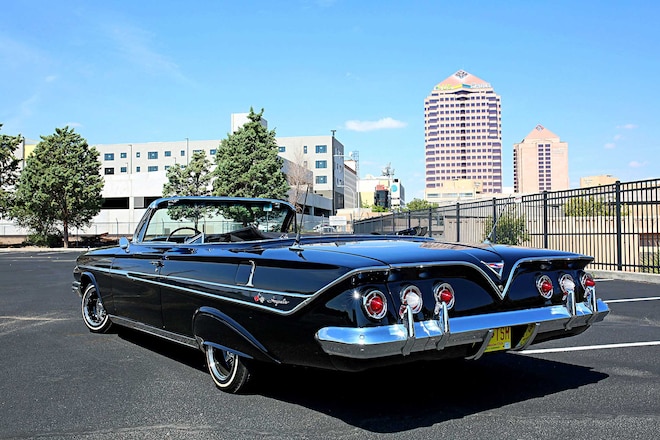 Joe Romero of Albuquerque, New Mexico, is a serious businessman. Always on the hunt for opportunity, he’s driven, ambitious, and believes that the best way to succeed is by forward thinking, executing on plans and doing each phase without half steppin’. But he shares that same work ethic and focus when it comes to his lowrider collection. As it stands, you can say that he’s currently holding a royal flush of lowriders as he owns every convertible Impala from 1958-1963, but this 1961 can easily be labeled his Ace of Spades, as it was the final piece to completing his collection.

When he found the 1961 it was complete but in need of a full restoration. The car needed the trunk and floorpans replaced and, in the process, he bolted the body up to a rotisserie to help make sure no stone was unturned. With every nook and cranny addressed, he spent a good amount of time locating N.O.S. parts. Once done, the car was finished off with a fresh coat of paint, a fully revamped black leather interior, as well as the mandatory set of Dayton wire wheels. Now that the car is complete, the three-year build not only completes his collection but saves yet another Impala that would otherwise be rotting away.