Newsletter
Sign Up today for our FREE Newsletter and get the latest articles and news delivered right to your inbox.
Home » 1961 Chevrolet Impala – Red Bottoms 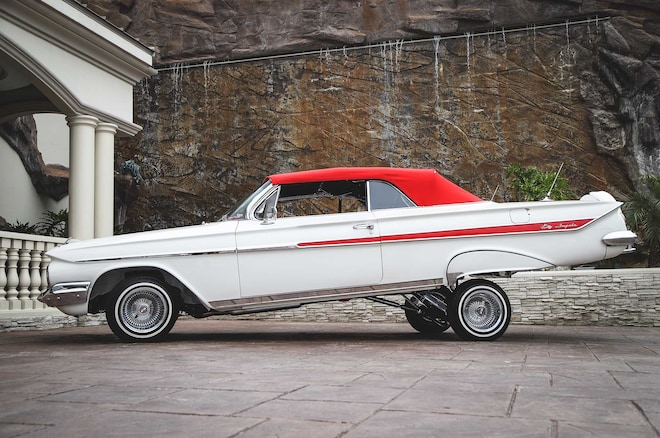 There is no limit to the lengths a car enthusiast will go to, and John Gasparyan is prime example of that. This is a story about a man who turned his vision into a reality and it all started when he was 16 years old and found himself drawn to the timeless art of customizing cars to his liking. Since then, John has amassed an impressive collection of classic Chevrolet Impalas and Cadillacs. He’s the proud owner of almost every model year in his fleet of vehicles and self-identifies as a collector rather than a seller.

Although it may be hard to pick just one favorite ride, John clearly has a special place in his heart for his award-winning 1961 Chevy Impala affectionately known as ‘Red Bottoms.’ John first purchased the car at an auction but soon after proceeded to strip it down to its core to create the beauty it is today. About $150,000 later, ‘Red Bottoms’ was the lowrider John envisioned down to the interior and intricate chrome fixtures. The sleek white convertible boasts a fully chromed original 283 with turbo glide transmission and the mandatory dual exhaust. John entrusted Twin’s Hydraulics to install the best hydraulics money could buy. The final result would give John one of the most lavish trunk setups on the boulevard today. The eight batteries power four custom pumps, which activate the 16-inch rear cylinders guaranteed to turn heads with the simple flick of a switch.

These days, John fills his free time with car shows and cruises on the streets of Southern California alongside his car club, Ruthless Riderz, a club name he himself has deservingly earned. Being the real “Rider” that he is, we ultimately concluded his photo shoot in the rain and if you look closely, you can see the rain drops in some of the pictures and during the shoot John even says, “Well I didn’t build it to keep it in the garage.”