Newsletter
Sign Up today for our FREE Newsletter and get the latest articles and news delivered right to your inbox.
Home » 1961 Chevrolet Impala Convertible – Ace Dippin’ 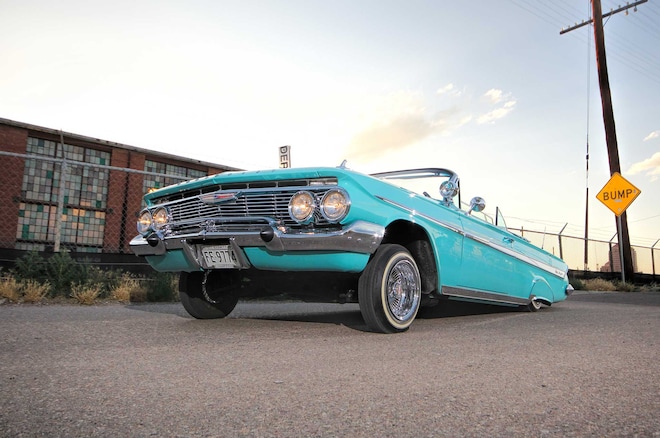 Issac Chiu is not what I would consider your normal lowriding enthusiast. His love for the automobile doesn’t start and end like a lot of us with just lowriders. His passion stretches all genres of the cars. He has and has had quite a few cars over the years from euros to lowriders. But lowriders have always had a special place in his heart. His parents say his first word was actually Carro, so I guess you say his passion started quite young. He is a member of the Imperials C.C. in El Paso Texas. He joined the club with a ’63 Impala but soon after decided to purchase one of his dream cars a 1961 Impala convertible when Joe Esparza had his up for sale. A deal was struck and the car made a new home in Issac’s collection. The paint and bodywork come by way of the Chevy Shop in California who did a beautiful job on this 1961. The Interior is by Ciadella which is Aqua vinyl with hardtop inserts. However with a many fresh new builds the car had it’s share of little electrical gremlins. Julian Trevino of El Paso went through the electrical system and got everything figured out. He also installed some accessories which include Muntz 4-track player, guidematic, 4-way flasher, compass and other items. Issac did not care for the anodized trim look so with the help of Benny Ramos (The Club President). They de trimmed the car and sent everything out to get chromed. “Old-School” Eddie Enriquez helped install the new spotlights as well as Saul Rocha who helped find the proper template to make sure The new spot lights fit properly. The cars stance was next on the chopping block and Issac knew exactly who was gonna take on the task of installing it. The car was taken to California so Anthony Fuentes of Homies Hydraulics could install a new 2 pump, 3 dump setup to get the car up and down. Not wanting the Hydro switches to look out of place, a custom set of factory switches was mounted under the dash. A third switch for the corners was put in place of an old vent knob to keep everything looking mostly factory. The car was almost cruise ready all it needed now was some cruising tunes. Issac had Omar Castaneda of Sounds R Us in El Paso, TX to install some equipment I had including a Pioneer Head Unit, Kicker amps JBL 6×9’s. He added a pair of DD Audio 608 subwoofers to this and built a custom box and amp rack painted to match the vehicle.

Acknowledgements
I want to give HUGE thanks to my perfect wife, Claudia, and 3 kids; Julio, Isabella and Paul, for their support and patience. I would also like to thank Benny Ramos, “Old-School” Eddie Enriquez, Paul “Poly” Heredia. Someone I cannot thank enough is my friend Jesus “Sarge” Silva. He has been instrumental in helping me with logistics, prepping the vehicles for events and so much more. He has done so much for me and our club. I also want to thank my Imperials Car Club family.