Newsletter
Sign Up today for our FREE Newsletter and get the latest articles and news delivered right to your inbox.
Home » Serial Classic Car Builder Unveils 1960 Impala Convertible Before Moving on to the Next Project 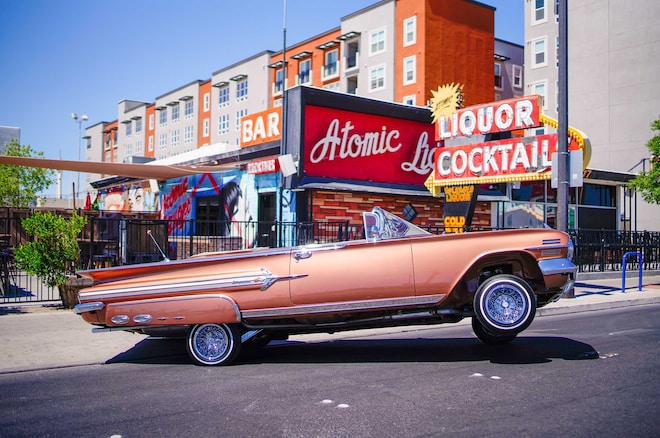 By day, Eric “Drifter” Gomez is a plumber, but by night, he’s a lowriding enthusiast and his 1960 Chevrolet Impala convertible is no stranger to turning heads on the Vegas strip.  Unlike most Impalas, Eric’s sports a custom copper paint job that’s reminiscent of a freshly minted penny. It’s an eye-catching color that serves its purpose, and the 13×7-inch Truespoke wire wheels pitch-in to complete the look.

Cruising a car of this caliber would be a shame to drive solo, but Eric has no worries as his wife Maria is usually right by his side; and, if not, one of his many club brothers from Amigos is ready to ride. Eric and his fellow members take great pride in the club and their community involvement. The Amigos host a Halloween extravaganza called “Trunk or Treat” and frequently organize fundraising efforts which include the collection and distribution of Christmas gifts to those in need. In all, Eric and his club brothers love to create meaningful memories and use their lowriders as a source of entertainment, while doubling up as a tool for helping the less fortunate.

As good as it is, this won’t be the last build you see from Eric. As an avid car nut and collector, Eric’s true passion is restoring and customizing classic cars. He’s more in love with the process than he is the car itself. There’s no doubt that in time, his restlessness will soon have him chasing the next fix. “It’s all a part of the culture I grew up in,” says Eric, referring to his childhood in San Diego. At 15 years old, he started customizing cars and fast forward to present day, and Eric can tell you that he’s lost count of how many cars he’s gone through.

But ask him if he’s got a most memorable car and he’ll probably mention the 1973 Buick Riviera he sold to famed television series “Counting Cars.” He sold the car to Danny Kohler (The Count), knowing it would be in good hands and the highlight was when Danny invited Eric back to the show to get his “Stamp of Approval” on the revamp.

Nickname
Drifting on a Memory