Newsletter
Sign Up today for our FREE Newsletter and get the latest articles and news delivered right to your inbox.
Home » 1960 Chevy Impala – Back From the Dead 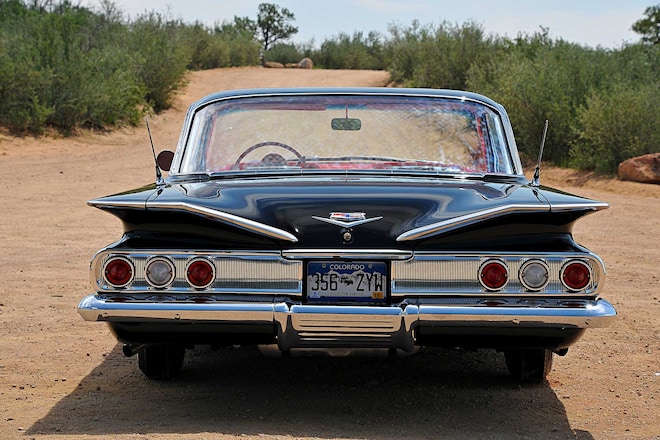 There is a certain satisfaction that one achieves by watching a vehicle that was once neglected to the point of junk become a custom classic worthy of turning every head when driven. Robert Vernon of Colorado Springs, Colorado, was 9 years old the first time he saw his cousin Steve’s 1960 Chevy Impala. “It symbolized my youth perfectly,” Robert tells Lowrider. “It was dangerous, mean, and definitely something that demanded attention.” Everything became clearer the day he got behind the wheel. Although he wasn’t the driving age, his cousin allowed him to see what steering and pushing pedals felt like. For the rest of his life that passion for classics remained inside him.

Unwilling to part with his 1960 after a decade of asking, Steve was fortunate to find a shell of a 1960 Chevy Impala while he was driving down a narrow alley on his way to work. He stopped the car and did everything to find the owner of the classic sitting in pieces. The owner said he could have it for $1,200 but he had to come get it before he junked it. Steve got on the phone with Robert and explained the situation. “He told me to get a trailer and grab cash and get here as soon as possible.” Robert adds, “I made the hour and a half drive with cash, sight unseen.”

The Impala was just as he described, rusted through and through, no glass, and no engine. The memory of him behind the wheel of his cousin’s classic motivated him to make the deal happen. Once Robert got the car back to his garage, he started stripping it down to the skeleton, exposing all the antiquated metal that needed replacement. He started a lengthy list of all the parts that were needed. Between eBay and driving across the country as far as Atlanta, Robert was able to gather up every original part for the Impala.

The next step was having the sheetmetal stripped and sandblasted. Around this time Robert was able to find a non-running 1960 four-door in Texas that he purchased for parts. With the help of his two friends, Brian Scott and Justin Goergan, Robert began the long process of the bodywork, aligning panels, sanding, and priming. He removed the beaten engine out of the parts car and had Clay at Lee’s Machine Shop begin the rebuilding process. The 283 was torn down, bored, and balanced with new pistons and an entire rebuild kit performed. The next step was all the interior components, as he ordered a Ciadella kit and had Joe Knowle at Knowle’s Upholstery rework all the seats and panels.

Now that the 1960 was ready for the final touch, Robert had the tough task of picking a color. We all know that choosing a color can make or break a restoration build like this, so Robert had to be careful. “Originally I was going to choose Roman Red with my new red interior,” Robert says. “But every time I googled an image of a 1960 I saw the Roman Red and I didn’t want to be like everyone else.” The one color that would make the bright red interior stand out beyond anything was a solid black. PPG Triple Black basecoat was sprayed throughout the classic, along with six coats of House of Kolor Flow Clear for weather protection in the volatile weather of Colorado winters.

Once everything was assembled and coated perfectly, Robert anxiously called Steve to see the finished product who was overwhelmed by the dedication and determination of his little cousin. He wishes to thank Steve for the motivation and guidance that he gave to him that led to bringing this Chevy back from the dead. Special thanks go to his girlfriend, Renee, and Brian and Justin for their assistance throughout the entire process and most importantly his mother and father for their support. Robert’s two sons, Bobby and Isaac, can now experience what it’s like to be a child behind the wheel of a car that changes your life for the good. Not many people can claim they resurrected a 1960 Impala, but Robert is proof positive that you can bring it back from the dead.

Nickname
Back from the Dead