Newsletter
Sign Up today for our FREE Newsletter and get the latest articles and news delivered right to your inbox.
Home » 1960 Chevy Impala – ’60 Love 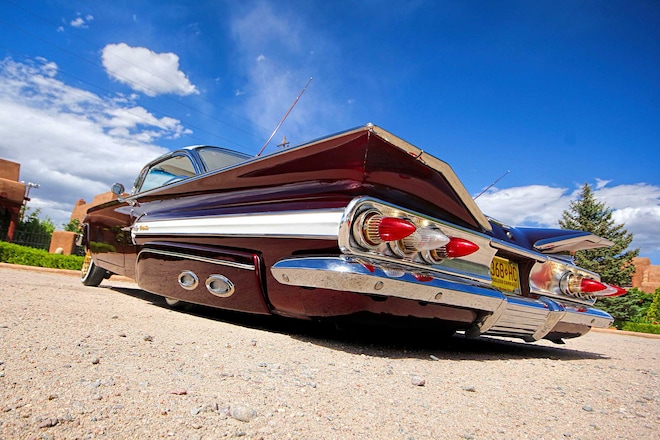 Jeff Quintana started off his love for lowriders by building lowrider bicycles in his backyard because he was too young to drive. But even then he knew that one day he would be the owner of a 1960 Impala.

In 2003 his dream started to become a reality because he found one stashed away in a field behind an old house. It was just a shell but that didn’t stop this man on a mission. Doing the majority of the work himself he started off by rebuilding the drivetrain. With the car’s running gear in order it was time to move onto the cosmetics. But tragedy struck when the car was almost complete and someone vandalized it. Even though he was discouraged he started over. Once the car was complete he showed it for a little while but then his interests turned toward motorcycles. So the car went into storage in 2009 where it sat for almost eight years, becoming quite run-down.

In 2017 his fiancee got tired of seeing it just sitting there rotting away. She asked him to get it out so they could go cruising. After pulling the car out it was so unrecognizable he vowed to redo the car. With the help of his nephew, Chris Gallegos, they started off sanding the car down to fix the chips and the faded candy. With the bodywork done Jeff stepped in and sprayed some fresh coats of Candy Brandywine. The hydros were next on the upgrade list. Removing all the old setup, Jeff, along with Leroy and Patrick Montoya, installed a completely new system, which included two Black Magic pumps and six Deka batteries. The interior had seen better days too and Jeff knew the perfect place to get it redone. He asked Julian and Son’s Upholstery in Sombrillo to stitch up a classic tuck ‘n’ roll in white leather. With the car looking like its old self it was time to hit the streets of Riverside once again.