Newsletter
Sign Up today for our FREE Newsletter and get the latest articles and news delivered right to your inbox.
Home » 1959 Chevy Impala – Dream Turned Reality 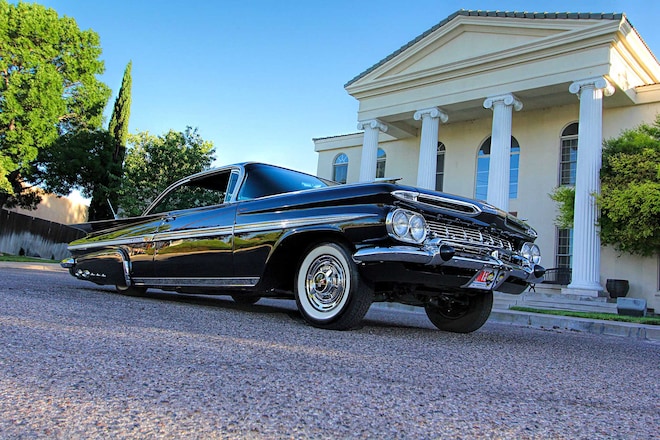 When you are young, you make friends and many memories. Friends may come and go but those memories stay with you long after your childhood has passed. Those memories help shape your future. In Joey Sanchez Jr.’s case, one of those memories was of a 1959 Impala.

He would always see the car cruising through his neighborhood as a young man. He admired the lines of the car and of course the rear end with those cat eyes staring back at you. That memory turned into his dream and eventually became his reality. He even went as far as getting a 1959 Impala tattoo on his arm so that he would have a daily reminder of his dream.

Years passed, he got married and had children. Projects came and went, but still no 1959 Impala to call his own. One day an old childhood friend who lived right down the street told him he was selling a 1959 Impala and he was the first person he called but he needed it gone right away. Joey told him he wanted to talk it over with the wife and asked him not to sell it. Joey went to the bank, pulled out the cash, and headed immediately to buy the car. A deal was struck and Joey and his friend David pushed the car a block and a half back to Joey’s house. He had used up all of his savings to purchase the car, but it was his and he could finally see his dream becoming a reality.

You might think that he would put a motor in it and some rims and start cruising it right away. Nope, Joey had a bigger vision. The car sat in his yard covered up for over a year while he saved money. He even sold his Harley so he could get funds to get his project underway. Knowing this project would cost a lot to do, he decided to do all the work he could himself. In 2011, he started the teardown of the 1959. He took hundreds of photos and bagged up all the parts. After it was all torn apart, he took the body off the frame and sent it to the media blasters. Even after seeing what was under all that paint, he wasn’t discouraged.

When it was time to find a metal and body guy he did a lot of research because we have all heard horror stories about body shops and he didn’t want his dream to turn into a nightmare. Edmund Werner came very highly recommended. Werner replaced the trunk and the floorpans, along with the driver-side quarter-panel before beginning the bodywork. He knew the car was going black, so after many hours of blocking, the car was finally ready to get some color. Again, Joey did his research and found Jerry Gutierrez from the Old Car Garage to spray the color and clear the ride.

While it was off getting its new paintjob, Joey and good friend Frank Moya cleaned up the chassis and rebuilt everything from the bottom up. They installed a freshly rebuilt 283 motor and tranny. Now that the chassis and engine looked just as clean as the body, they were joined back up. Joey started putting all the newly re-chromed and anodized parts back on the car piece by piece. This was a long tedious process and Joey worked every spare minute he could on it. But family always comes first. With kids in sports and keeping the wife happy, it took a lot longer than it normally would. After what seemed like eternity to Joey, the car was finally nearing completion.

It was now ready for its new Ciadella interior, which Jaime Diaz from 3 Angels Upholstery installed beautifully. Now that the interior was complete it was time for new glass all the way around. Another longtime friend and neighbor, Hiram Holguin, was called upon to perform the task. Joey and his family were almost ready to start cruising. With the car sitting on the stock wheels and hubcaps, he stood back and looked at the car and it looked sweet but something was missing. So he called Jerome Rocha over at Southwest Choppers and after some debating Joey decided to go with a RideTech setup. Now that the car laid frame, Joey stood back and admired his 1959; his dream was finally a reality and it was ready to cruise. It was time to take the car out with the family and show everyone his masterpiece.