Newsletter
Sign Up today for our FREE Newsletter and get the latest articles and news delivered right to your inbox.
Home » 1959 Chevrolet Impala – Paid in Full 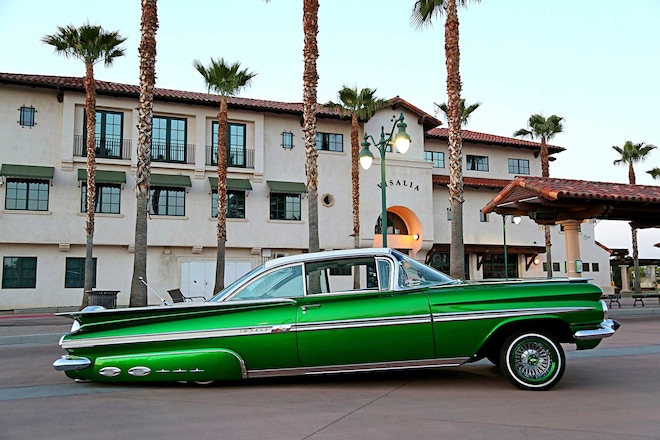 Like many of us, Vincente Nunez had wanted an Impala ever since he was a kid. And just like most of us, he also found out that it wasn’t such an easy task to accomplish once he realized just how much it would cost to build. So, when it came time to customize his first car he decided to take on his work truck, a 2001 Silverado—a truck that ultimately wound up being a show-worthy feature that landed in the pages of Lowrider.

Years later, Vincente felt like he was ready for the big leagues so he decided to hunt down an Impala. “I told myself, ‘Why not get the King of Impalas and get a 1959?'” From there on in he spent any free moment scouring the Net, newspaper ads, local shops, and just about anywhere he could think of. After countless hours, his efforts led him to Palm Springs where he found a complete 1959 that was running with a solid body and a new interior. The car also happened to belong to an autobody shop owner who was in the midst of restoring it. “It was his daily driver and during the restoration process he decided to sell it to me,” Vincente says.

Once the car was back home, it was sent to 559 Custom to have an air-ride setup installed and the entire undercarriage powdercoated. The car was then brought back to Vincente’s shop (Premier Paint and Body) where they took the car down to bare metal. He began smoothing the body until it was laser straight and then had Roman Felix lay the two-tone candy organic green and pearl white paint. Philip Rincon then added some ‘striping before it was cleared and buffed. To make sure it ran properly, the 283 was rebuilt by Lawrence before it was mated to a 350 turbo from Joe’s Transmission. The final stop of the build was Central Valley Upholstery where they installed the stereo system as well as the Ciadella interior kit.

With the entire build process taking less than a year, a fellow club member mentioned that he must have “paid in full” in order to get it done so quickly and that ultimately led to the vehicle’s moniker. This build is proof that patience and a lot of hard work will ultimately make any dream a reality so long as you stay consistent with your daily efforts to realize your true potential.