Newsletter
Sign Up today for our FREE Newsletter and get the latest articles and news delivered right to your inbox.
Home » 1959 Chevrolet Impala – OG ’59 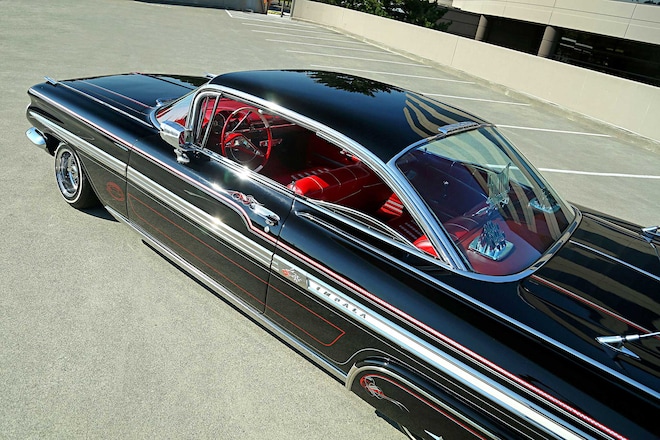 The love and admiration of old cars is something Marcelo Ovalles always had. From race cars to clunkers, Marcelo always seemed to be wrenching on a new project, but his love for the 1959 Impala was one of those love affairs he could never shake.

In 1979, he got his first taste of lowriding and hasn’t looked back since. He went on to build multiple cars, including his beloved 1959, but due to unforeseen circumstances and bad timing he had to let it go physically, but never mentally or emotionally.

As time passed, Marcelo’s skill set grew and his financial situation was better so he took to the Web in search for another 1959. His search had him dissecting all of the Pacific Northwest and that’s when he finally found it. It was a 1959 that needed a little elbow grease, but with a straight body and the need for some minor renovation he knew this was the one. With his mind made up, the first thing he did was let his wife know about the car, and her response was, “”If you believe this is the one, go ahead and buy it.”

Filled with excitement, Marcelo entered the auction with high hopes and even more anxiety and by auction’s end he went home the winner of his dream car. When asked how he feels about the purchase and the final build, his response was simple: “I’ve had plenty of cars come and go but this is the one. This is the one that I will never let go.”