Newsletter
Sign Up today for our FREE Newsletter and get the latest articles and news delivered right to your inbox.
Home » 1959 Chevrolet Impala Convertible – The Mothership 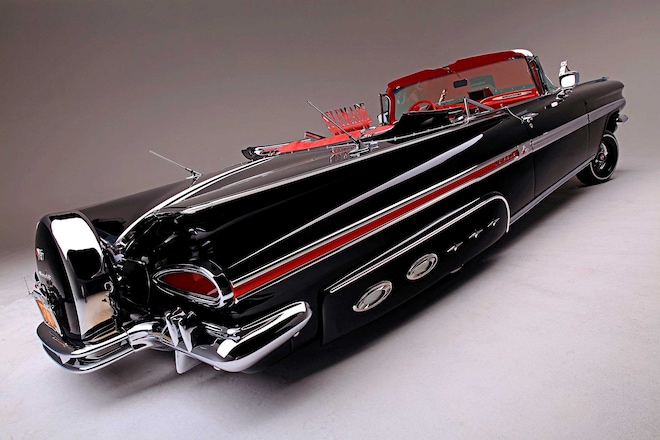 Being no stranger to custom cars, Chris Mills is nothing short of a car fanatic. He’s been through a laundry list of exotics and anyone in the L.A. car scene knows all too well how he pulls up. From Phantoms to Bentleys, Lambos to Porsches, he’s been through them all, but little did most know that at heart he was a lowrider enthusiast—and a member of Self Made LAX Car Club.

In fact, he’s owned plenty of lowriders. He’s owned four Cadillacs, a 1962 hardtop, a 1961, a 1957 rag, and a 1964 rag, and the fact remains that Chris isn’t new to it, but true to it. As of late, he’s also become a staple of the L.A. lowriding scene and he’s not afraid to drive what most would store in their garage. In short, he’s active on those streets.

When asked to compare exotics to lowriders, he spit nothing short of the truth. “I’ve owned Lambos, Phantoms, a Carrera GT, and other exotics but there’s no feeling like being in a lowrider. The way it tips, the attention it gets is unreal.” But as the tone of his voice got more serious, he says, “Honestly, the exotic car scene is cool and all, but lowriding has a camaraderie that’s unreal. You’ll hear people say it’s not a hobby, it’s a lifestyle, and it’s true.”

When asked about the major differences between the two, he starts by talking about classics being an investment. “With lowriders you can have fun and make a few bucks, especially if you choose the right models.” He adds, “Exotics will throw a curve ball in you finances because of depreciation but the biggest difference is in the culture and the crowd. Look, I’m a car lover like the next man, and I’ve been around a whole lot of people, but the lowrider community is one that’s made up of people who work hard for their family and their lowrider.”

He goes on to explain in-depth the difference between car cultures and follows it up by saying, “With exotics, you might pull up on 10 Phantoms, but none of the owners will talk to the next man. On the flipside, lowrider folks treat each other equally and have a mutual and genuine respect that’s real to the roots.”

Since its debut a few years ago, Chris and the The Mothership have become an inseparable duo. He’s attended local cruises, bagged one lowrider show after the next, and even at hard-core hot rod shows the pair have attracted a mass audience. But his 1959 that graces the cover of this issue had humbled beginnings—and some might even say it started off with a lot of hot air. After finding the car in Alabama, he had a local shop perform a factory restoration on the matching-numbers classic that sported the original 348 Tri-power.

Eventually that same car would evolve into what is now known as The Mothership. Once the restoration was done he had it delivered back to L.A., and that’s when he realized that he kept scraping the bumper kit trying to get up his driveway. To solve the problem, he did the unthinkable and in his own words said, “This was a factory restoration and I didn’t want to cut it, so I installed air like an idiot—and a little while later I felt the heat,” Chris says.

That heat came by way of many who admired the car with backhanded compliments. They loved the car, admired the detail, but every once in a while someone would say, “But it’s not cut.” Leaving their comments in hindsight, he went about his business but it wasn’t up until a chance encounter on the block that set things off.

The final blow came on particular incident that went down while leaving a show. “So one day I’m headed North on Crenshaw and I see this car heading south. From far away I could see the headlights tippin’ and I already knew it was another lowrider. So right when we get to the intersection of Crenshaw and Vernon, dude hit the switch on me and that was it,” Chris says. “I immediately got on the phone with MacGuyver and said, ‘Look I’m bringing this car to Stealth, and I don’t give a f*ck, I’m not driving it again until it’s cut.'”

As it turns out, the one responsible for hitting switches on Chris was his homie Tweet from Professional Car Club. “Honestly, I didn’t even know it was him at first, but I thank him every day ’cause had he not done that, I would have never cut the 1959, and I would have never created The Mothership.”

As he talked more about the situation, he reflected back on that night and talks about how it changed him up for life. Wanting to come back into the game strong, he decided to reup the pristine 1959 and parts of the plan included a race motor developed by a race team along with doing a revamp from the frame up. “I don’t play when it comes to cars. And I knew that if I was going to get back into it, I had to go all the way,” he says. He continues on by saying, “Some might say ‘Ahhhh … [Tweet] f*cked you up’ when he hit them switches on you, but he didn’t, he actually woke me up and I give him props every day because now I feel like driving The Mothership every time I see it.”

As with most custom car owners, there’s usually some sort of regret, but when asked about anything he’d change his response was stern, and with a laugh he said, “My only regret is not cutting it to begin with.” And when asked about the process of the re-up, he said it was effortless. “There’s a lot of great builders in the game, and I’ve been around this car game for a long time, but I’ve never been around a builder as meticulous and as picky as MacGuyver/Stealth Motorworks. If I ever throw him a problem, he’ll solve it, and he’ll build it to last.”

Till today, he continues to create quite the commotion and The Mothership has become the crown jewel of the Los Angeles street scene. But don’t let that fool you into thinking that Chris has become complacent with the love and admiration. Instead, it’s got him fired up and plotting his next moves. And while the details of his future projects are being kept under wraps, we were lucky enough to get a preview of what he’s got in store.

With that said, his plan is to leave us shook and we’ll leave it up to you to decipher his final words when he says, “Lowriding is therapeutic for me. It lets me escape and I’m in it for life. Besides, I’m not done playing on these streets so just remember that behind every Mothership is a Battleship and together they’ll create a Championship, so get ready.”

Top tracks to cruise to
The Dramatics – “Just Shopping (Not buying Anything)”
Earth, Wind & Fire
Ohio Players
Minnie Riperton – “Back Down Memory Lane”