Newsletter
Sign Up today for our FREE Newsletter and get the latest articles and news delivered right to your inbox.
Home » 1958 Chevy Impala – 2018 Lowrider of the Year “Final Score” 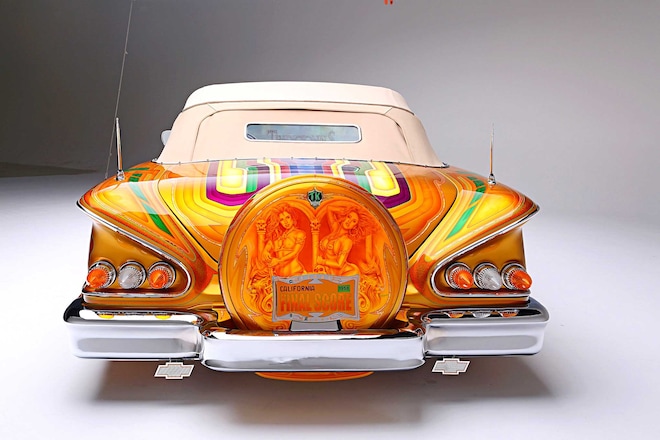 Most are enamored by the glitz and glamour of owning an award-winning show car, but very few understand or even think about the sacrifices it takes to get there. There’s the sleepless nights, the arguments, the tight budgets, the rising prices, the list goes on and on. In reality, building a lowrider is a ritual and right of passage in itself. It’s the process that builds friendships, and the pains that build character, and because of that it makes lowriding so much more than just personal.

Our lowriders become a part of the family. They are keepsakes to be handed from one generation to the next. But imagine having your beloved lowrider violently taken away from you in a split second. Now imagine being witness to it. This is what happened to Chris Roark, and in response he turned a major setback into a payback.

The name Chris Roark echoes in the world of lowriding. Known for building award-winning—and highly controversial—cars he’s definitely no one-hit wonder; his record speaks for itself. Among the vehicles in his small fleet is a silver 1957 Bel Air convertible (Silver Legacy) that took Original of the Year, a black 1958 Impala hardtop (Dark Side) that was three-time Traditional of the Year, and of course the aqua blue 1958 Impala hardtop (Perfect Score) that won Lowrider of the Year three consecutive years.

You see, while on his way back home after winning his third title for Lowrider of the Year he was involved in an accident, and as a result Perfect Score was totaled. The years of hard work, money, and patience were gone in a split second and he was at a loss for words. But not all tragedy ends in failure, and Chris is proof of that. Shortly after the loss, Chris decided that the best form of therapy was to go out and build yet another car, but not just any car. He wanted one that would replace Perfect Score, which is when he decided to pull the covers off of a 1958 Impala he had purchased and left to sit some 20 years ago.

“When I set out to build it, I wasn’t looking to build it to compete with anyone other than myself,” Chris explains. To begin with the car was in shambles. It needed a full restoration and the floors were rotted, so after breaking the car down they started on the frame, which he had molded with engraved inserts. All the supports were relocated from the bottom of the frame and moved up top. The original axle was molded with the pumpkin from a 1962 Corvette, the frame was candy painted and patterned, while Angelo Maisano was called in to stripe the frame. Tubular A-arms and wishbone were then installed, along with disc brakes. Once the custom aluminum gas tank was installed they moved onto the engine compartment where an all-aluminum LS1 and transmission from a Corvette were installed. Several aftermarket parts were added to the engine, but what really stands out is the custom-built Y-pipe cold-air intake.

With the undercarriage and engine built at C&C Customs, the body was sent out to Matt Seret for the metalwork. When the metalwork was done, it came back to C&C where they began adding modifications, such as a one-off grille, single piece front bumper with frenched in license plate, molding the continental kit to the rear bumper, shaved door handles/cowl/emblems—and that’s just a start. The car then left C&C to go to Tekni Kolor Kustoms. It was there that Tommy and Gil finished off the bodywork and prepped it for Steve Santos who made a custom candy mix with sunshine gold and pagan gold candies that he laid all over the car. He then laid out multicolor patterns that ran from the body and interconnected with firewall, dash, center console, doorjambs, door panels, and trunk. Striping was then laid out by Rory and Armando Serrano. Sammy De Leon was brought in for his airbrushing skills. De Leon added murals on both sides of the continental kit, under the hood, under the trunklid, inside the fender walls, and on the back of the front seats. He also added the leafing to the car and paint to multiple parts in the engine, undercarriage, and trunk compartment. C&C then built a one-off, four-pump setup that had 92 custom-made pieces. ABC Upholstery paid them a visit to wrap the 1967 Buick Riviera seats they are using in fine leather with dyed alligator inserts. All the engraved parts were sent out to Hernan D’Aloia for the final touch.

In all, the build process took four years and that’s when it received its moniker “Final Score.” Since then, Mr. Roark has proven once again that’s he no fluke—especially when one considers that he just recently came home with his third consecutive Lowrider of the Year for Final Score.

As the interview came to a close, I couldn’t help but think of what he’s amassed. In total, Chris has won 10 sweepstake titles in three different categories and multiple Second and Third Places with other vehicles, so I just had to ask if being competitive was in his nature, and almost immediately he replied with, “I don’t see myself as competitive. I am always looking to improve and outdo myself. I’m an engineer, so when I visualize something, I create a game plan for it, a design, and then create it. That gives me the ability to not have to rely on much outsourcing and I can create most of my vision in-house.”

So, will there ever be a fifth title-contending car for Roark? I guess only time will tell. In what could be the most appropriate ending for this story, I’ll leave you with the words of former Dodger Mike Marshall when he said: “Victory is in the quality of the competition, not just the final score.”

Engine
With a shaved firewall and molded fenders the all-aluminum LS1 and 460L transmission out of a Corvette was installed with Billet Specialties serpentine kit, Street & Performance low-profile intake, custom chrome and engraved radiator, and custom air cleaner and engine cover.

Body/Paint
The countless list of body modifications includes molded cow, shortened skirts, single-piece bumper, molded continental kit, shaved emblems, shaved door handles, modified fender spears, and custom trim. Tekni Kolor Kustoms used a special mix of House of Kolor sunshine gold and pagan gold mix for the one-of-a-kind candy paint. They laid out patterns in blue, green, yellow, and purple patterns on the outside of the car that interconnected with the patterns on the dash, firewall, trunk, doorjamb, door panel, and center console of the car.

Suspension
Custom-made flooring, molded frame with inserts, and all the supports relocated to the top of the frame, SSBC master cylinder, Wilwood disc brakes, tubular A-arms, one-off tubular wishbone, and a molded stock axle with a 1962 Corvette pumpkin. Custom-built four-pump hydraulic setup to look like two double-whammy pumps, with four Adex dumps, four 31-series batteries, and a total of 92 custom-made pieces to complete the setup.