Newsletter
Sign Up today for our FREE Newsletter and get the latest articles and news delivered right to your inbox.
Home » 1958 Chevrolet Impala – Movin’ On Up 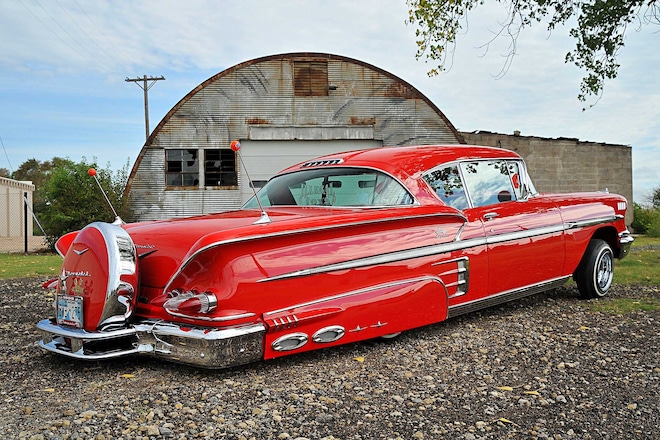 It’s always difficult to step out of the shadows when you’re one of eight kids in a household. Jose Julian is the second youngest of six brothers and always looked up to his older brothers while growing up in Tlayacapan, Morelos, Mexico. The family decided to seek a better life so they moved to California. Shortly after, they relocated to Atlus, Oklahoma, when Jose was 12 years old. At the time, his older brother worked at a body shop and started fixing up lowriders, which is when Jose fell in love with the culture. Once Jose turned 16, his mother bought him a 1986 Honda Accord that he decided to fix up and add his own personal style. Through the hard work of his family and close friends, Jose was able to get his accord featured in a 2001 issue of Lowrider.

Over the years, Jose began his search for something rare and more unique than an import. Browsing through advertisements he saw someone selling a 1958 Chevrolet Impala in Denton, Texas. “It was in the process of being built,” Jose tells Lowrider. “I knew it was going to take some work but I was ready for the challenge.” After Jose bought the car, it went straight to Verret Motorsports to install an LS1 5.3L motor as well as a 4L60 transmission.

Jose then contacted his friend Cody Davenport to take care of some electrical and mechanical issues. Davenport installed the brake lines, added power windows, Vintage Air, and all the steering and front linkage. While Davenport was working on the car, Jose removed the interior and brought it to Julian’s Upholstery for a Ciadella interior kit. A bright red carpet and new headliner were added to blend into the eye-catching exterior, as well as cruiser skirts and a Continental kit.

Kenny’s Classics helped source some hard-to-find parts, while the upper and lower A-arms were extended and chrome plated. The original rearend was shortened and chrome plated, and the belly was sandblasted and painted to match. The Impala frame got a partial wrap and was painted. As for the trunk, new cylinders and batteries were added. To top it all off, Jose added a set of 1959 Cadillac taillights.

The last step was complementing the ride by using a classic-style rim. Jose added a set of 13-inch True Classic wire wheels wrapped with Premium Sportways. Jose knew this was going to be driven often so he made sure to go over every nut and bolt and had everything looked over to guarantee safe cruising in his 1958, which he named “Over8ted.”

Coming from a large family, Jose knows the importance of giving a child the drive and passion to reach their own goals and successes. Jose’s 11-year-old daughter, Jiselle, told her father when she was 10 that she wanted to be involved in the lowrider community. “I took her to a show and she saw all the hoppers launching one by one.” Jose adds, “She looked at me and said, she wanted to do that.” One year later, Jiselle is now known in the Midwest as the youngest hopper and has won numerous contests, even hitting 103 inches at the Odessa, Texas, Lowrider show in her 1991 Mitsubishi Mighty Max.