Newsletter
Sign Up today for our FREE Newsletter and get the latest articles and news delivered right to your inbox.
Home » 1958 Chevrolet Impala Convertible – The Celebration Continues 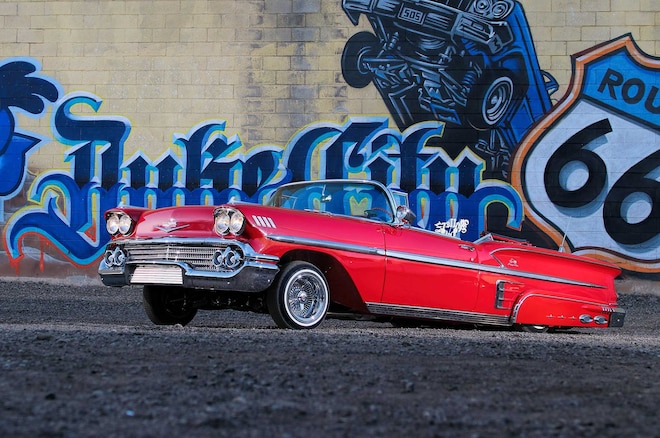 The 1958 Chevy Impala is to many, the holy grail of lowriders, and Joe Romero can attest. He had long dreamed of adding one to his collection, but thanks to an eventful announcement, the one-time dreamer found no better way to celebrate becoming a grandfather than by gifting himself one—at least that’s what he told his wife, Angel.

Having built many trucks and cars throughout the years, Joe is no stranger to building and adding to his collection. One of his first builds was a Mitsubishi truck that was featured in Lowrider back in ’99, and the truck remains a part of his collection till today. In addition, Joe also happens to be the promoter for the Albuquerque Lowrider Super Show, so when he set out searching for a ’58, he went through his black book and reached out to his old friend Johnny Sanchez, who in turn led him to the perfect candidate.

The car was shipped straight to Albuquerque Classics for a frame-off restoration. To start, the floorpans were replaced, the frame cleaned up, and all pieces were either replaced, painted or chromed. To make sure the Dayton’s didn’t rub on the cruising skirts, the rearend was shortened, and once the chassis was back on the body, Paco, Reeo and Vidal spent hours prepping and long-blocking the body to perfection. Once ready Vidal stepped in and sprayed the same PPG Viper Red that was on the underside of the vehicle. The car seemed to be moving along at a great pace, but what held him back was the sourcing of all the period-correct parts for the ’58. What made it more difficult was that many of these parts were specific to the 1958, so the pickings were slim, and among the parts he acquired, the most difficult proved to be a few of the factory moldings including the rear S-trim piece. During the search for parts, he had the original 348 rebuilt to keep all the numbers matching. And once all the trim was located, they were sent out to be chromed or polished by Krazy Kutting.

After getting a new Ciadella interior installed by Martins Custom, he thought it would be the final piece to the puzzle, but as he stepped back to admire the vehicle, he realized that it needed one last touch. The stance was somewhat of a bother to him, so he called up Sean Daly (Straight Street Automotive) and told him that he wanted air suspension installed under the strict rules that no holes were to be cut in the car. To make that a reality, Sean utilized industrial-strength magnets to install the tank and pumps and the job was complete.

It’s been close to five years since Joe found out he was going to be a grandpa and now that his grandson Joseph Ray is already taking a liking to grandpa’s new ride, he’s already calling it “Grandpa’s Big Red Car.” Joe also mentions that he was quick to tell his grandson that once he’s old enough, he’ll be handing him not only the keys to the big red car, but the keys to a family legacy and a tradition that will forever be passed on.