Newsletter
Sign Up today for our FREE Newsletter and get the latest articles and news delivered right to your inbox.
Home » 1958 Chevrolet Impala Convertible – .58 Caliber 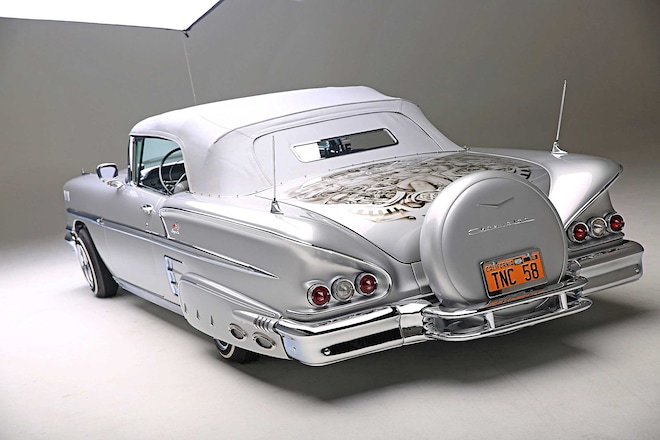 Ryan purchased his first lowrider at the age of 18. Since then he’s had at least a dozen Impalas. Most of the cars that he’s had were all original, including a 1963 Impala that he would show and place in original class. Building originals is what Ryan knew and knew well. This time around, he wanted to go against the grain; he wanted a frame-off show car. He had never done a car from the ground up and wasn’t sure what he was getting himself into. He believed that six monthes was all it would take to get the car to were he wanted it. It ended up taking four years and it all started with finding the right project car for the build.

He found this 1958 Impala convertible in San Diego. In the last 35 years the pink slip to this 1958 had gone from one hand to another, but it never left the city. “I knew the history of this car; that’s why I didn’t hesitate on buying it.” Knowing the history of the car is important, especially on a high-dollar car like a 1958 rag. The reason it’s important is because there are many conversions out in the market that are valued a fraction of the price. If you aren’t careful, you could end up paying full price for a conversion.

With the car in his possession, Ryan headed over to Hoppo’s to see if they would be able to create a one-of-a-kind setup for him. “I told them I wanted something unique. They saw the caliber of what the car is supposed to be and then Alex at Hoppo’s told me that he had an idea for a one-off setup that he wanted to do for his own car.” That idea was a belt-driven setup. Hoppo’s would create a mockup of the setup before machining everything and installing the setup. Once the one-of-a-kind setup was installed and in working order it went to Top Notch Customs who took care of the setup’s cosmetic needs.

When it came to the paint, Ryan was going to go with a patterned candy blue paintjob. He had legendary painter Sal Manzano come in and candy pattern the frame. “I sat and looked at it for a while. I wanted to do something different but patterns weren’t for me.” He decided to go with a solid color and after researching online, he didn’t find a silver 1958 convertible out there. “I saw plenty of black, red, orange, and common color for 1958s but I didn’t see a convertible that was silver.” Bert at the Chevy Shop did the bodywork, painted the car silver, and then assembled the car. After it was painted, Ryan was talking to Big Al out of Ventura trying to come up with a name for the car. Big Al suggest on calling it caliber since the silver paint reminded him of a bullet and thus the moniker .58 Caliber was created. To finish off the paint he reached out to Fonzy who hasn’t airbrushed many murals in the last couple of years. Fonzy did a single color mural with a variety of ladies holding guns and also painted the car name on it.

Look under the hood and you will find a 5.7 LS motor with an aluminum block. After Ryan and friend Jose Romero took the motor out of a 2003 Corvette, they took it to Turn Key Engine Supply to have it rebuilt. When he got it back, he took it all apart and sent off parts to get chromed. To add the final touch to the engine compartment, TNC came up with a one-of-a-kind cover that was engraved and is going to get murals by Fonzy.

The interior looks stock but it has a minor twist to it. The inserts are leather and all in black and gray colors to go with the paint that was provided by Ciadella and hand-stitched by California Upholstery. The front seat was placed in a custom rail so that 6-foot-4-inch Ryan can put the seat back and seat comfortably.

When it came to the undercarriage TNC designed a custom 9-inch rearend by Currie Enterprises, shaved 3.5 inches off the disc brakes to make them fit, and molded tubular A-arms. Jaime Castanera added the engraving to the undercarriage, rims, and a touch of diamond cut, and Crown Plating dipped everything in chrome.

A couple of days after the shoot, Ryan broke out the 1958 at show for the first time and it instantly became the talk of the show. At the end he took home Best Traditional, Best Hydraulics, and First Place in the 1955-1959 convertible class. This car wasn’t built to be a style car or a points car; it’s not intended to win Lowrider Of The Year; it was built to his liking and that’s at a high caliber.

Body/Paint
Molded the cow and painted it silver