Newsletter
Sign Up today for our FREE Newsletter and get the latest articles and news delivered right to your inbox.
Home » 1957 Chevy Bel Air – The Best of Both Worlds 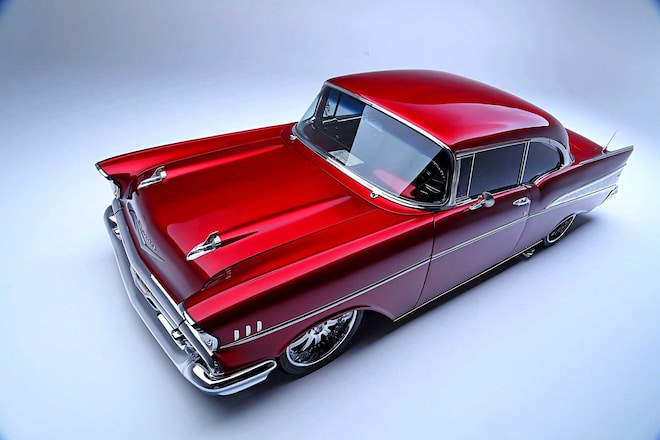 We talk plenty about what it takes to build a custom car. We talk about the money, the patience, and the inspiration, but in the end the key to getting anything accomplished in life is dedication and consistency. Of course the first thing you’ll need to do is figure out exactly what you want to build, and for Steve Noesser it all happened while lending a helping hand.

One day while visiting friend Mario Camarena, he helped him bring his 1964 convertible to V-Max’s shop. It was there he spotted a 1957 Bel Air sitting off to the corner, and that’s when he decided it was time for him to build his own.

Expressing his interest in that exact year, make, and model, Mario helped him locate a 1957 in Escondido, California. Weeks later, what was once a dream was now an actual project and the first step was to have the car body worked by Oscar Valdez prior to Hector Custom Colors laying down a slick candy paintjob.

Now look inside and you’ll find that California Upholstery revamped the guts with an accenting caramel leather interior while a one-off air setup by Hoppo’s is sitting pretty in the trunk surrounded by custom leather-wrapped panels.

All in all, the car looks like a restomod from the outside, but pop the trunk and hood and it’s easy to see the lowrider influence. The beautifully detailed 5.7L LS engine was installed by V-Max and as if that wasn’t enough he had Alex Uribe install a ProCharger supercharger. The motor has been majestically detailed with accenting colors, chrome, and engraving and it’s a sight that’s as powerful as the motor itself.

In completion, this 1957 merges hints of lowriding with hot rodding. It’s a dream car that will keep you staring—so long as Steve’s not on the gas pedal, at which time it becomes nothing but a blur.