Newsletter
Sign Up today for our FREE Newsletter and get the latest articles and news delivered right to your inbox.
Home » 1957 Chevy Bel Air – Quick Climb Up The Food Chain 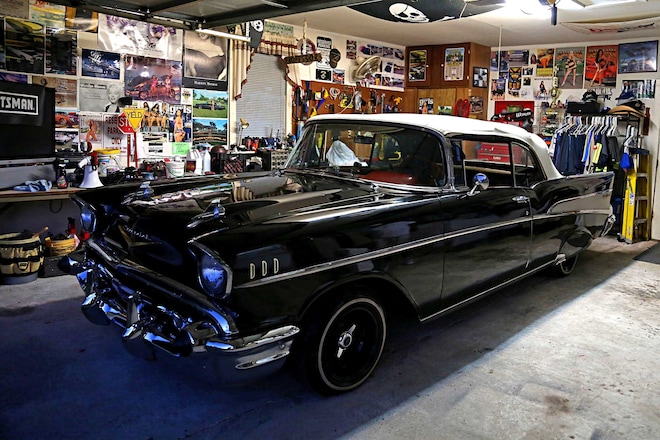 When it comes to lowriding, both the 1957 Belair and 1958 Impala convertibles are considered to be on top of the food chain. It is rare to find one and when you do, it isn’t cheap. Owning one was a dream of Larry of the Individuals Tulsa chapter but he never thought he would own one, until one faithful day the stars aligned for him.

Larry was at work, just like any other day when he got a call from a friend of his. “Did you check out the Market Place (on Facebook) this morning?” asked his friend. He hadn’t but did so immediately and once he did he saw this rust free 1957 Belair convertible selling for $40,000. “I messaged him six times within an hour to call ‘please call me’ along with my number,” said Larry. After an hour, he received the call from the gentleman selling it. He said that he had several dozens of messages from people but that he decided to call Larry first because he was the closest to him. Larry left work to go see the car and negotiate terms, the owner had agreed to let him have it for $36,000 but he had until 7pm that day to come up with the money. Larry combined his savings along with the money he had from previously selling his ’64 Impala but was still a few stacks shorts. He called a friend who helped him with a loan to complete the money and later that night he was driving home in his dream ride. Dream do come true, you just have to be ready to seize the moment when it comes knocking, like Larry did.