Newsletter
Sign Up today for our FREE Newsletter and get the latest articles and news delivered right to your inbox.
Home » A 1957 Chevrolet Bel Air That’s Heaven Sent 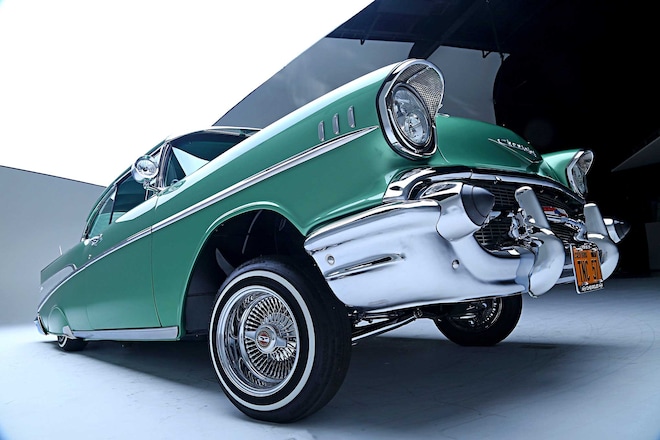 For centuries, humans have honored the passing of loved ones in many different ways. From building mausoleums to creating statues or foundations, the ways to preserve and celebrate the memory of loved ones are plentiful. Although rare, some have even chosen to bury loved ones with their favorite car, and while I’m more inclined to get a tattoo and pour out a little liquor, our next featured guest decided to build a lowrider to immortalize his loved ones.

To honor his father, sister, nephew, and brother, Dooley built a 1957 Bel Air; the inspiration came from all the good times he had shared with them. When asked what triggered the build, Dooley replied, “I was drifting on a memory when I thought of the idea and it all came together.” He further adds, “My father owned a lot of cars but out of all of them his favorite was his 1957, and it so happened that my cousin had one that was in good condition.”

After striking a deal to pick it up, Dooley took the car directly to TNC who began the disassembly for a frame-off build. After much time debating what color to go with he finally settled on a metallic green that Louie Carrillo applied, followed by some incredible airbrush work from Sal Elias featuring a striking canvas that is deep and incredibly detailed. From there the motor, hydraulics, and interior appointments were addressed and the complete package is one that is both touching and jaw dropping.

When it came time to name the car, “Drifting on a Memory” was a clear choice as it was his father and brother’s favorite song. In addition, the song serves as the perfect moniker for his lowrider because he’ll be the first to admit that as he cruises the car low and slow he literally drifts on a memory as he thinks of all the great times spent with his loved ones.

Vehicle Nickname
Drifting on a Memory