Newsletter
Sign Up today for our FREE Newsletter and get the latest articles and news delivered right to your inbox.
Home » 1957 Chevrolet Bel Air – The ReUp 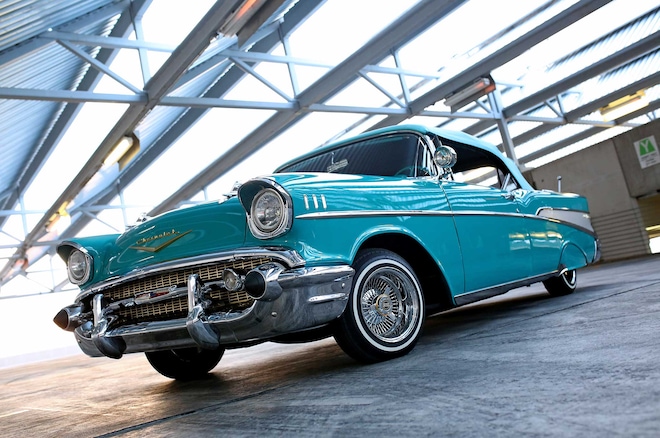 Name the year of an Impala from 1958 through 1967, and Ken Jacquez has owned all of them. As an avid collector, he purchased only convertibles that were highly packaged, so when it came time to picking up a ’57, he wanted only the purest of original specimens. During his search, he ran across an older lady who was selling one. She was a tough seller who didn’t budge on her asking price of $65K, so he gave her his number and politely passed on the deal.

A short time later, Ken purchased a ’58 Impala convertible. And 16 months later, he sold it. On Good Friday, as he sat there contemplating his next move, he got a phone call from the lady with the ’57. She asked him if he was still interested in the car and Ken calmly replied, “If the price is right, I’m interested.” From there, he requested current photos of the car. When she said she wanted $55K, he went straight to the bank and wired her the money and got a 1957 Bel Air that was in great original condition from what turned out to be the original owner.

Once he received it, he took the car into a shop to have it repainted. Unfortunately, the shop couldn’t deliver on their promise and wasted 8 months for nothing, so he took a chance on a painter named Robert Cardenas at Show Off Customs. Eager at the chance to show their talents, Robert and his crew went out and picked up the car and immediately got to work. They stripped, sanded and bodyworked the entire car and after painting it, it was reassembled. The final step was to install the trim, molding and bumpers, so he called up Chris Armenta to button it up and the final product is this striking ’57 that you see here.