Newsletter
Sign Up today for our FREE Newsletter and get the latest articles and news delivered right to your inbox.
Home » 1957 Chevrolet Bel Air – The Mack 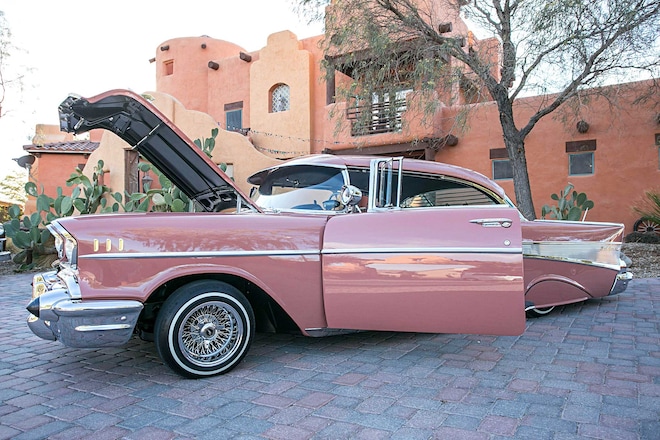 We all remember our first. From the first time you put your hands on the switch to the first time you hit the block with your friends, these are the times we cherish; and things were no different for Jose “Pepe” Martinez. At only 16 years old, he had already lowered his truck and was cruising on a brand-new set of triple gold Dayton Wire Wheels—no small feat at such a young age.

As he reminisces about the good old days, he recalls, “Rapper Mack 10 had just released a new album. Back then, when new music came out, you had to jump in your car and go to this place called Tower Records,” Pepe says jokingly. But it wasn’t what Mack 10 was rapping about that had an influence on Pepe. It was the album cover: a black and white image that exhibited Mack 10 leaning on a 1957 Chevy. From that moment on, Pepe became infatuated with the idea of owning one, and thus the pursuit of his dream car began.

In 2003, he found “The One.” Yeah, she was a bit rough, but she was complete. And more importantly, she belonged to him. The first step to making his dream a reality began by dropping in a Chevy small-block 350 crate engine. Gangsters Speed Shop in Las Vegas installed the engine. While the frame’s pressure points were being reinforced and the custom whammy tank with four dumps and four switches was being welded in place, Ernesto’s body shop began the unenviable task of prepping the body for paint. The original Canyon Coral color, which was picked out by Pepe’s daughters, was applied throughout the car, as well as the trunk and engine compartment. Sergio at Metal Finishers refurbished, polished, and re-plated all the original metal trims. This five-year restoration finally came to a close with the installation of a custom-ordered Ciadella interior, Pioneer audio system, and, like most projects, a brand-new set of all-chrome 72-spoke Zenith wire wheels mounted onto Premium Sportway tires bolted on by three-way cast knockoffs.

And while our first will always have a special place in our heart, it’s the one we end up with that truly defines the men we become. Fortunately for Pepe, he still has that 1990 GMC and somehow both of his loves have learned to share his time, his love, as well as his garage.