Newsletter
Sign Up today for our FREE Newsletter and get the latest articles and news delivered right to your inbox.
Home » 1957 Chevrolet Bel Air – Looking for a Fix 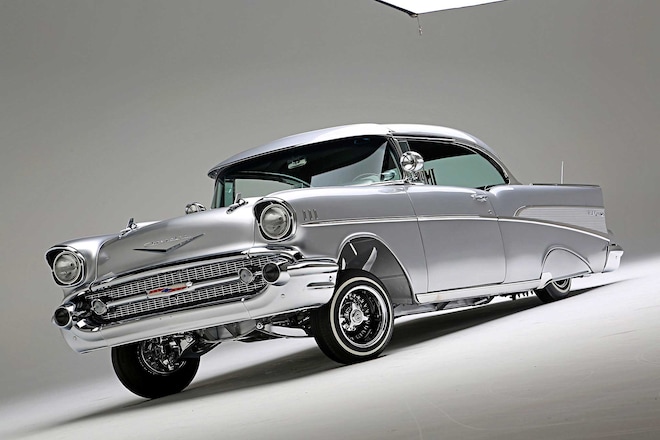 Looking for his next fix, Robert Barajas had a pocket full of money and was up at the wee hours of the morning. He took to the Pomona Swap Meet fiending for a high, on the hunt for a 1963 Impala convertible. He had scoured the grounds with no luck but on his way out he spotted a 1957 Bel Air. “I’ve always had an interest in building a 1957 so I took a look,” Robert says. After a few minutes he pulled the trigger and walked away with a relatively decent 1957 that was confirmed with a handshake and $24,000 in cash.

With empty pockets and a loaded trailer, Robert made his way back home to Fresno.

Days later he dismantled the car, dropped the body off to the sandblaster, and that’s when truth revealed itself. “When I picked up the car I couldn’t believe what I saw. The body was bad, really bad,” Robert says. His excitement faded to disappointment as he realized the tremendous amount of bodywork it needed. At this point many would have taken their losses and moved on, but Robert decided to take on the project and started doing metalwork. From there, it was brought to SNK Autobody where they coated the entire body in a lustrous black. While reassembling the 1957 he had a change of heart and decided to repaint it silver. While waiting for the body to be stripped down and repainted, he took the time to piece together a small-block 327 with tons of polished parts while acquiring all the parts for his Pesco setup.

A year a half later the car was finally done and in its final form it’s a showstopping example of a lowrider. With an already-successful roster of convertible Impalas under his belt, this latest addition should have been enough to satisfy any lowrider’s appetite, but not Robert, as he’s already looking to do a ’60s rag, proving once again that old habits are hard to break.