Newsletter
Sign Up today for our FREE Newsletter and get the latest articles and news delivered right to your inbox.
Home » 1957 Chevrolet Bel Air Convertible – Clean ’57 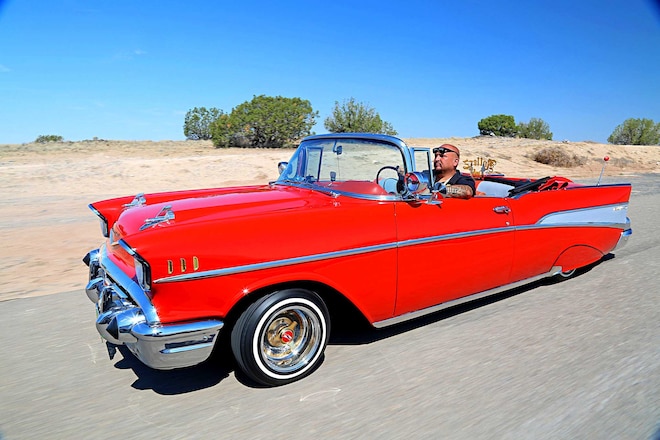 Bugs is no stranger to classics cars. Born and raised in Hawaii where his father owned a variety of hot rods, he was exposed to the scene, but it all changed in high school when they moved to the mainland and ended up in Albuquerque, New Mexico. At the time, The Duke City had a major lowrider scene sprouting and Bugs was there to not only experience the growth but build alongside it as he started a lowrider of his own.

He’s now been representing Rollerz Only for 25 years, and with a number of Impalas having already been built he wanted something new, something fresh. “I got a call from my friend Johnny Sanchez. He told me he was selling his 1957,” Bugs says, so he went to go look at it. It was in overall decent shape and needed just a bit of work, so he struck a deal and brought it home.

He began by taking the car to fellow club member Sean “Gotti” Daly’s shop. Daly installed the airbag setup and laid the factory color paintjob. Martin Solis then installed the red and silver interior kit while Izaak Cordova wired the beat. After finding and installing a continental kit and slapping a fresh set of triple gold Daytons on 5.20s the build was finally completed.

He took out his rag for a cruise and immediately began getting stares and thumbs up. “There’s nothing like seeing everyone’s jaws drop as I cruise by.” It’s safe to say that Bugs will be keeping and enjoying his convertible for a long time.

Suspension
G-body rearend, Classic Industries master cylinder, Wilwood disc brakes and booster with an air-ride setup that has a single ViAir compressor and a 10-gallon tank