Newsletter
Sign Up today for our FREE Newsletter and get the latest articles and news delivered right to your inbox.
Home » 1957 Chevrolet Bel Air – 318 Sundays 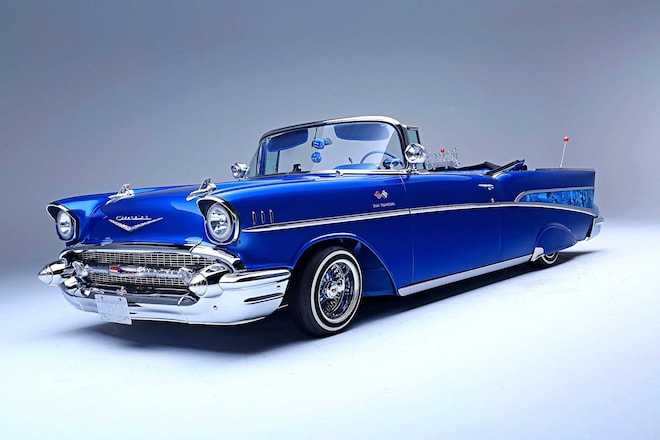 At 9 years old, Keith Whitner may have been your average student, but after school he became the talk of town when his cousin Art would pick him up in a green Coupe De Ville that was juiced. “[My cousin] would hit switches and I would go nuts,” Keith explains.

Those long-lasting memories were enough to suck him into the world of lowriding and by the time he was of age, his first car was a 1964 Impala. Soon after he’d follow up that build with a 1961 but his dream car had always been a 1957. At the time, it seemed like a far and distant dream but after getting a lead on one located in North Georgia, Keith decided to take a look. Fortunately for him he was able to strike a deal and bring it back home.

Pumped up and eager to start, Keith recruited Dale Price (a well-known bodyman in the area) to lead the build. Dale was a perfectionist who never cut corners, so to get the job done right he felt it necessary to cut off all the panels just to get it right. Getting the job done may have seemed easy enough but with Keith’s son playing football at Syracuse University and his daughter playing volleyball at University of Alabama, Keith says “I travel from coast to coast supporting my kids, so you can imagine how crazy my schedule is.” In fact, his hectic schedule meant that he could only work on his car on Sundays and as a result the build took almost six years to accomplish. In that time, he had the bodywork done, the car painted, and along the way managed to find time to drop in an LS, custom interior, and so much more.

Several hiccups may have delayed the build, but in all it was the car he always wanted and a car he thought would be his last. Yet at the time of this writing, Keith’s already acquired a 1958 convertible, so it’ll be just a matter of time before we’ll be following up on what just may be another banger.